This week my mate Phil came along, he is a… 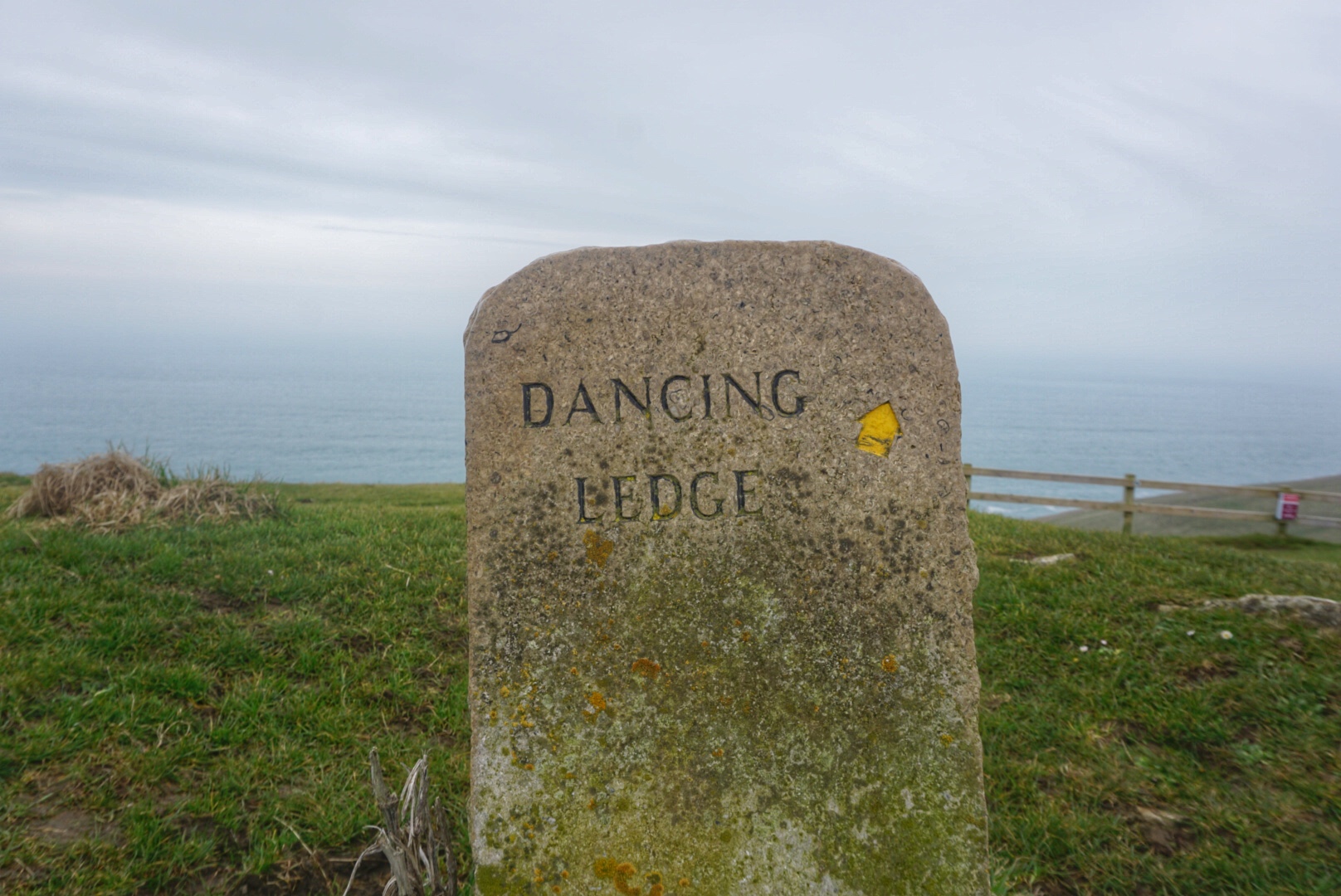 Phil and I have done a few trips together, notably a 3000 mile drive across America from Texas to Los Angeles in 2016.

This time we were both looking for some fresh air closer to home, and Phil had just bought a new toy that was perfect for getting us there… 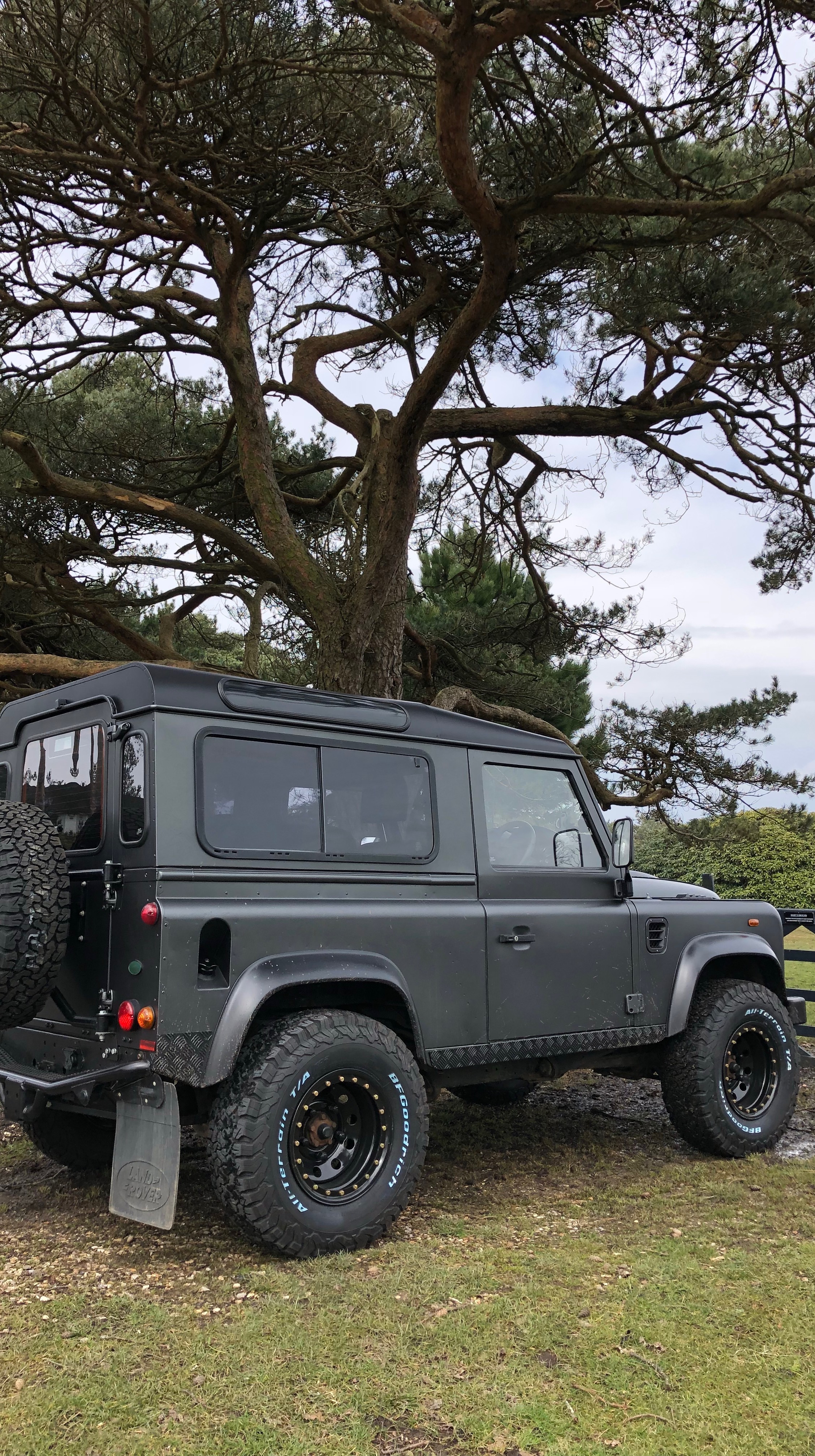 Parking up in Langton Matravers we stretched our legs and pulled on our backpacks, before heading off to find a good camping spot. I drove through this place a couple of years ago and wanted to come back to explore, so I was excited for this one. 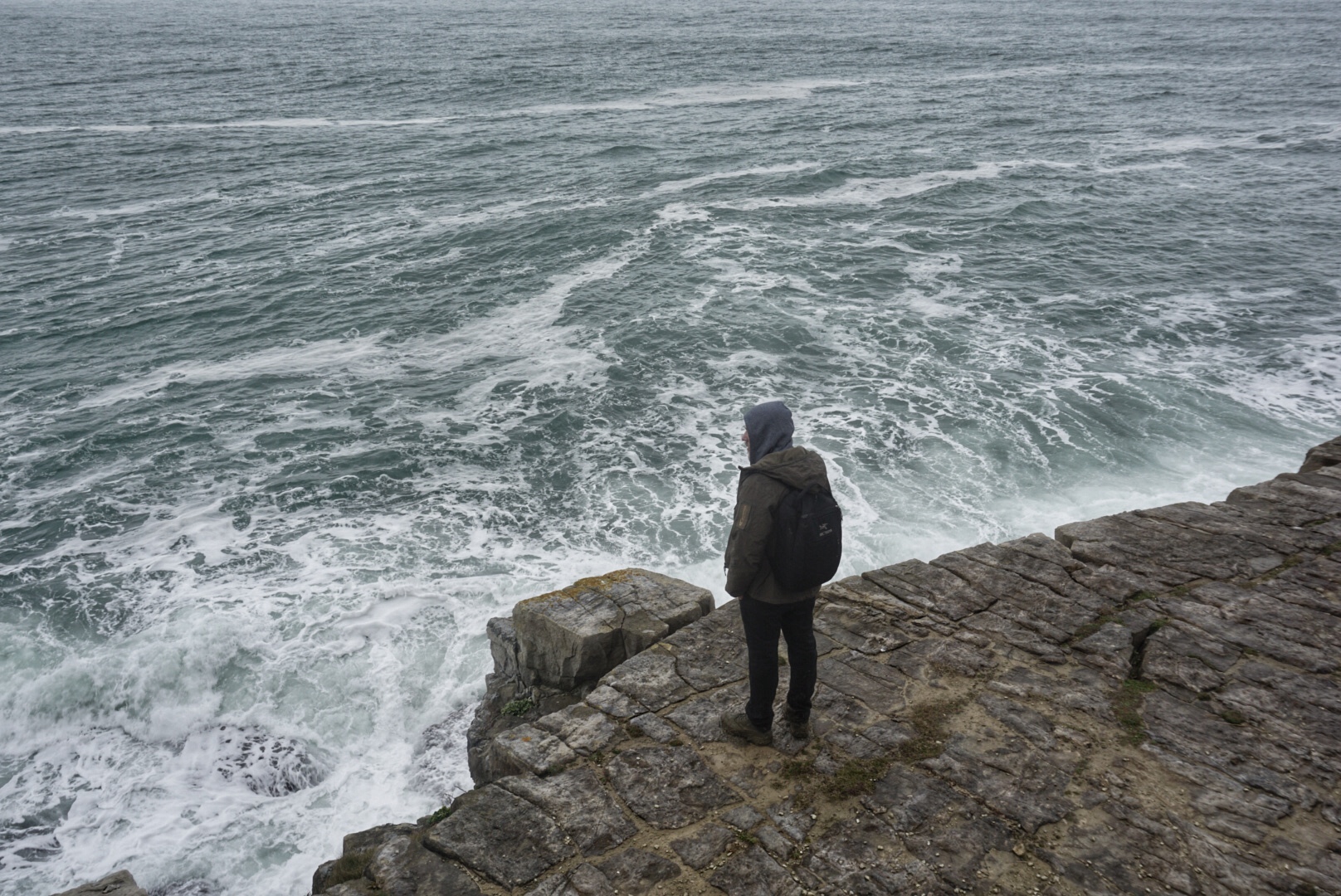 Dancing Ledge is a man-made vertical quarry bank, that ships could dock against in order to transport the famous local Purbeck Stone to other locations. The name ‘Dancing Ledge’ comes from the water at high tide creating a visual illusion making it look as though the ledge is bobbing around (fun fact).

Hiking slowly along the coast we were constantly being distracted by the incredible scenery and views. The sea was a rich shade of green despite the  rough water, and I can generally confirm that the Jurassic Coast is a beautiful part of the world, you should go there. 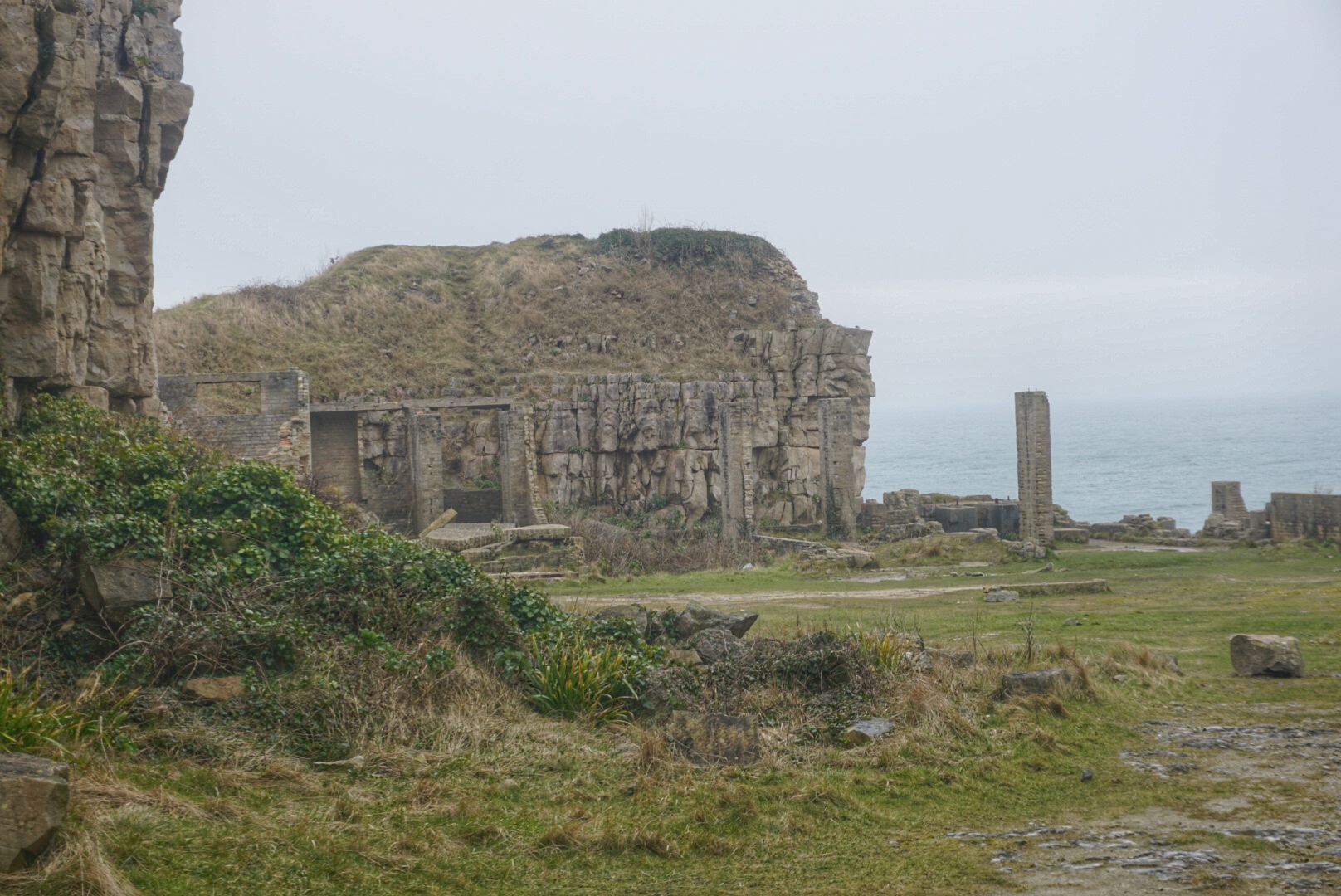 Later we arrived at Winspit Quarry, which is HUGE and littered with caves that you can explore easily, also some decent looking climbing and bouldering 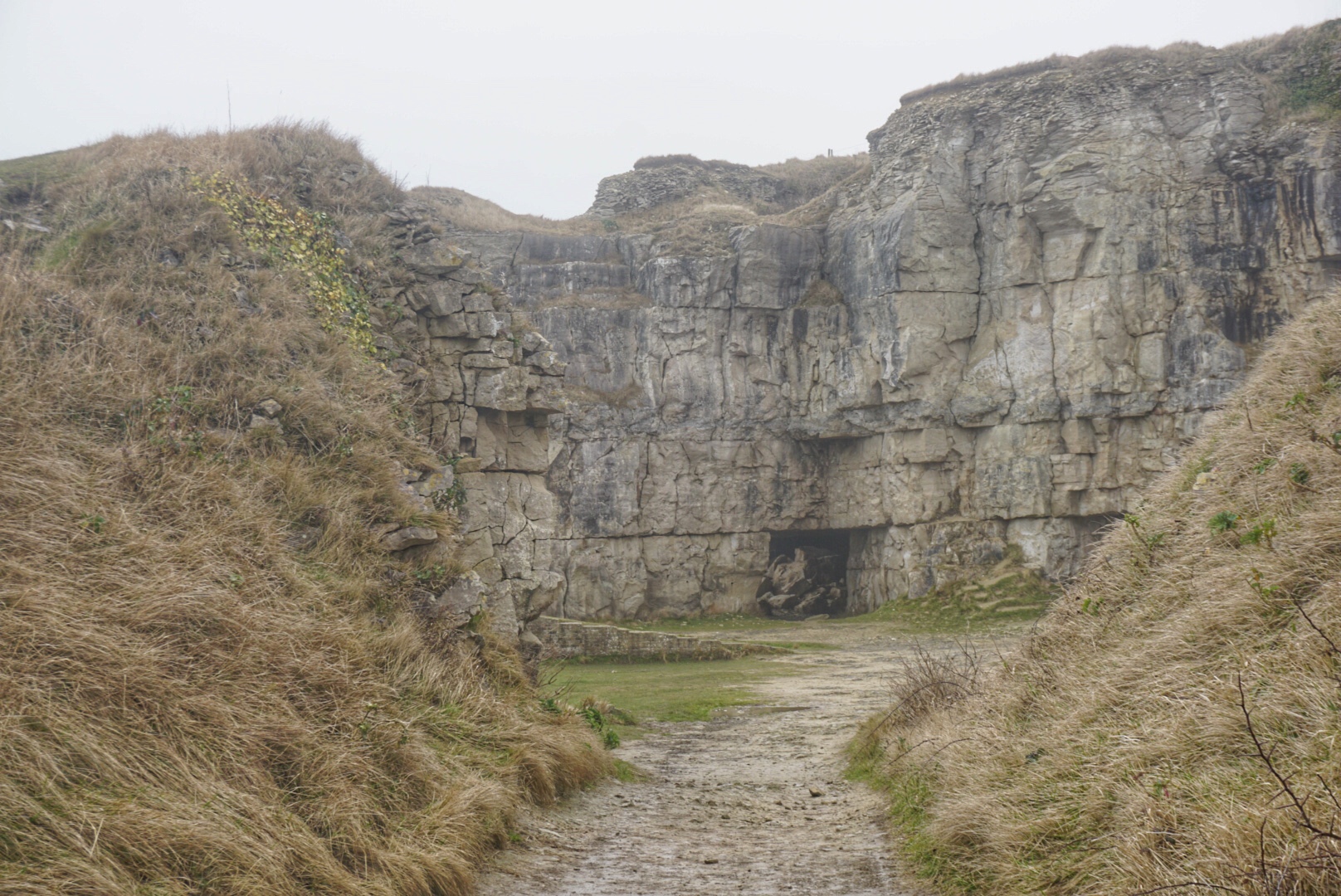 We were thinking of camping in one of the caves, but saw that two guys had beaten us to it and were in the middle of a BBQ. They were really friendly and invited us to join them, so we had a quick chat but decided to carry on.

The mud was slowing us down so the evening came around quickly. We stopped just short of the viewpoint at St Aldhelm’s chapel and found a little bit of level(ish) ground to camp on – it was free and came with sea views: 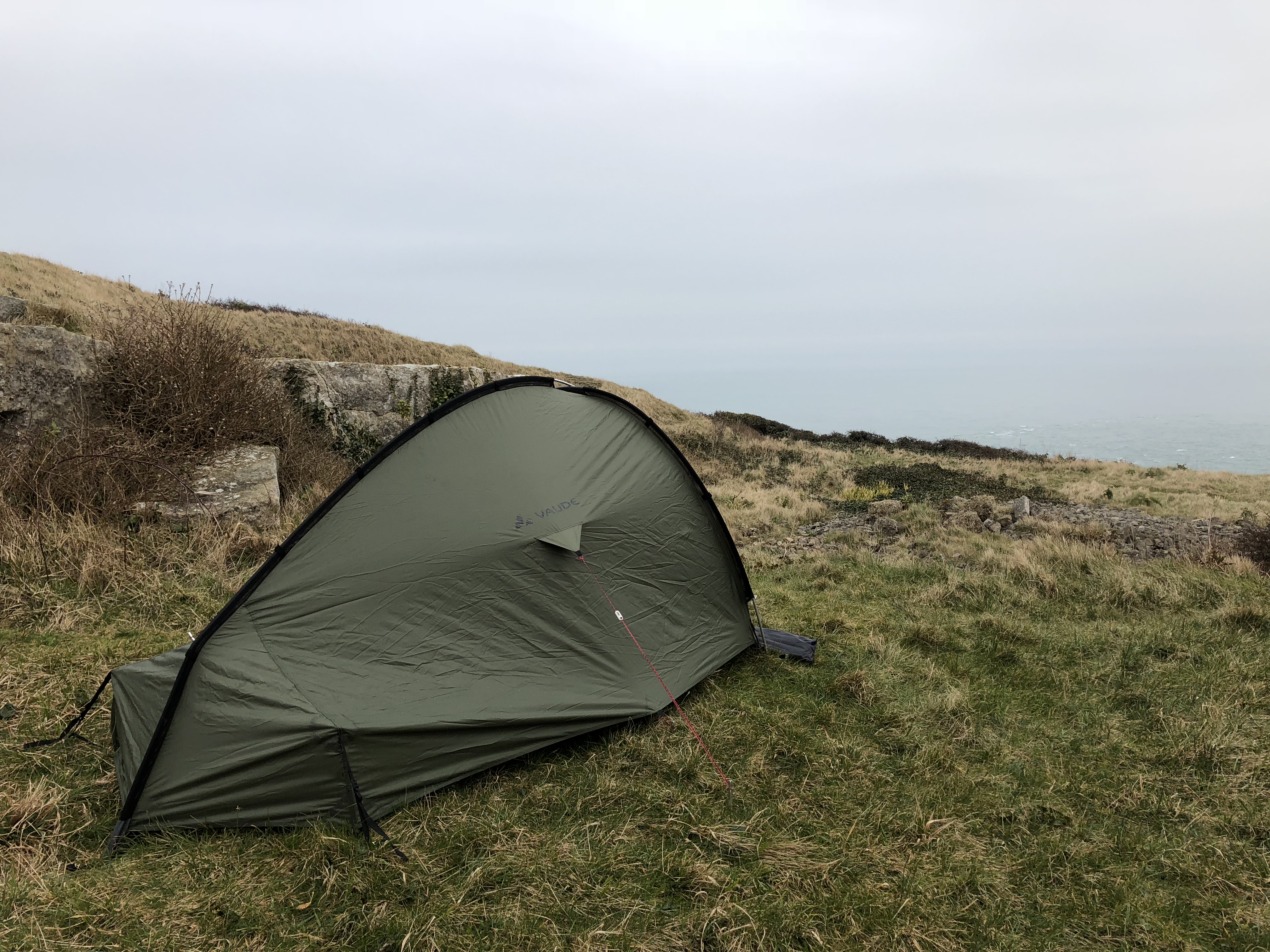 The sun was setting so we lit the stove to do some cooking. Dinner was a Wayfarer Food Pack, boil in the bag meals that keep for three years! I can’t award them a Michelin star or anything, but it was tasty enough and no-one shit themselves afterwards (always a plus).

There was just enough time to boil up a chocolate pudding before it was dark, and with nothing else to do we went to bed.

I woke up  a couple of hours later to the sound of the wind whispering through the tent, it settled down and I was left with a total silence, fresh air and darkness. Perfect. 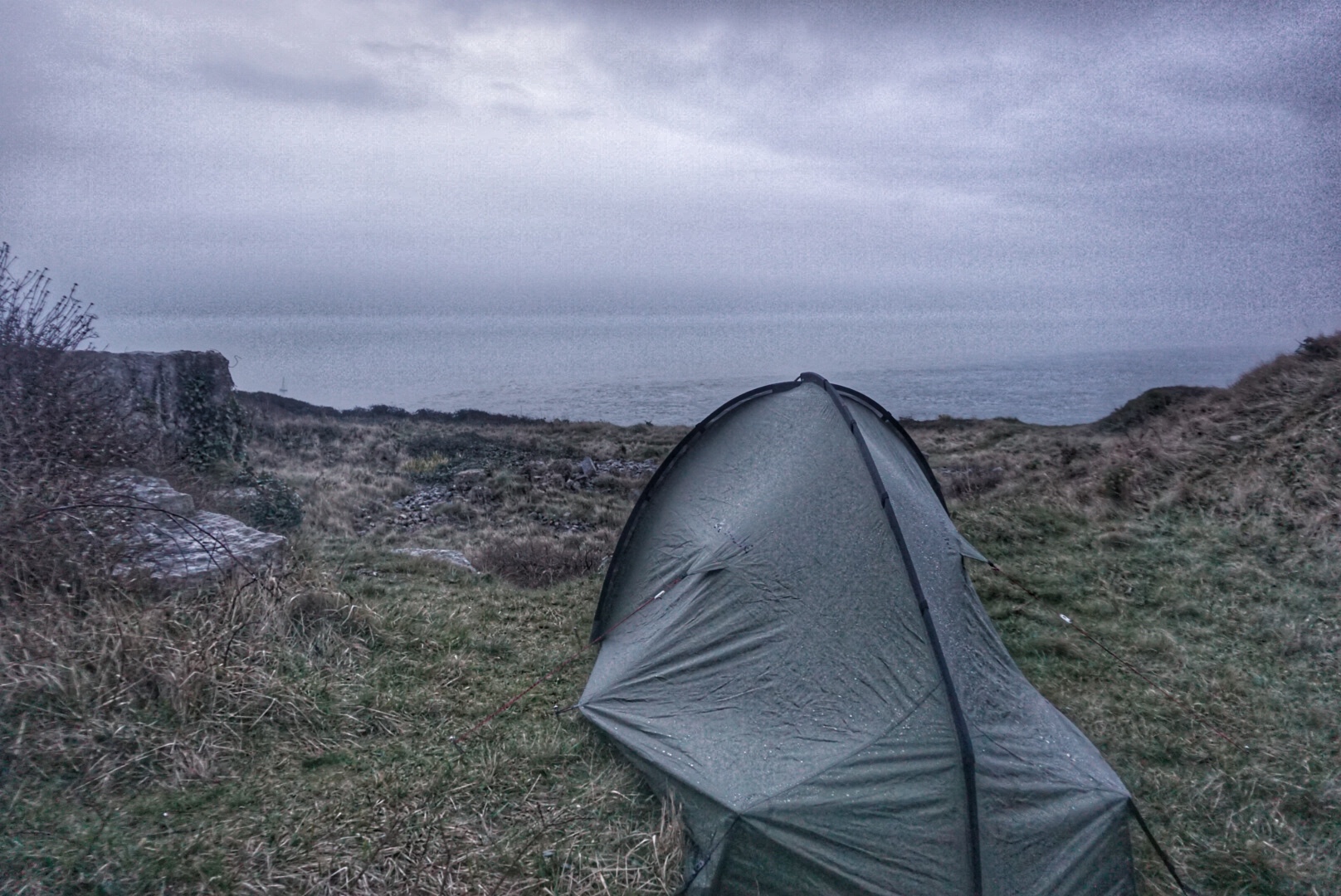 The next morning we packed up early. There was a set of steps overlooking our tent, which was a great place to watch the sun rise. Then we headed back to the car. 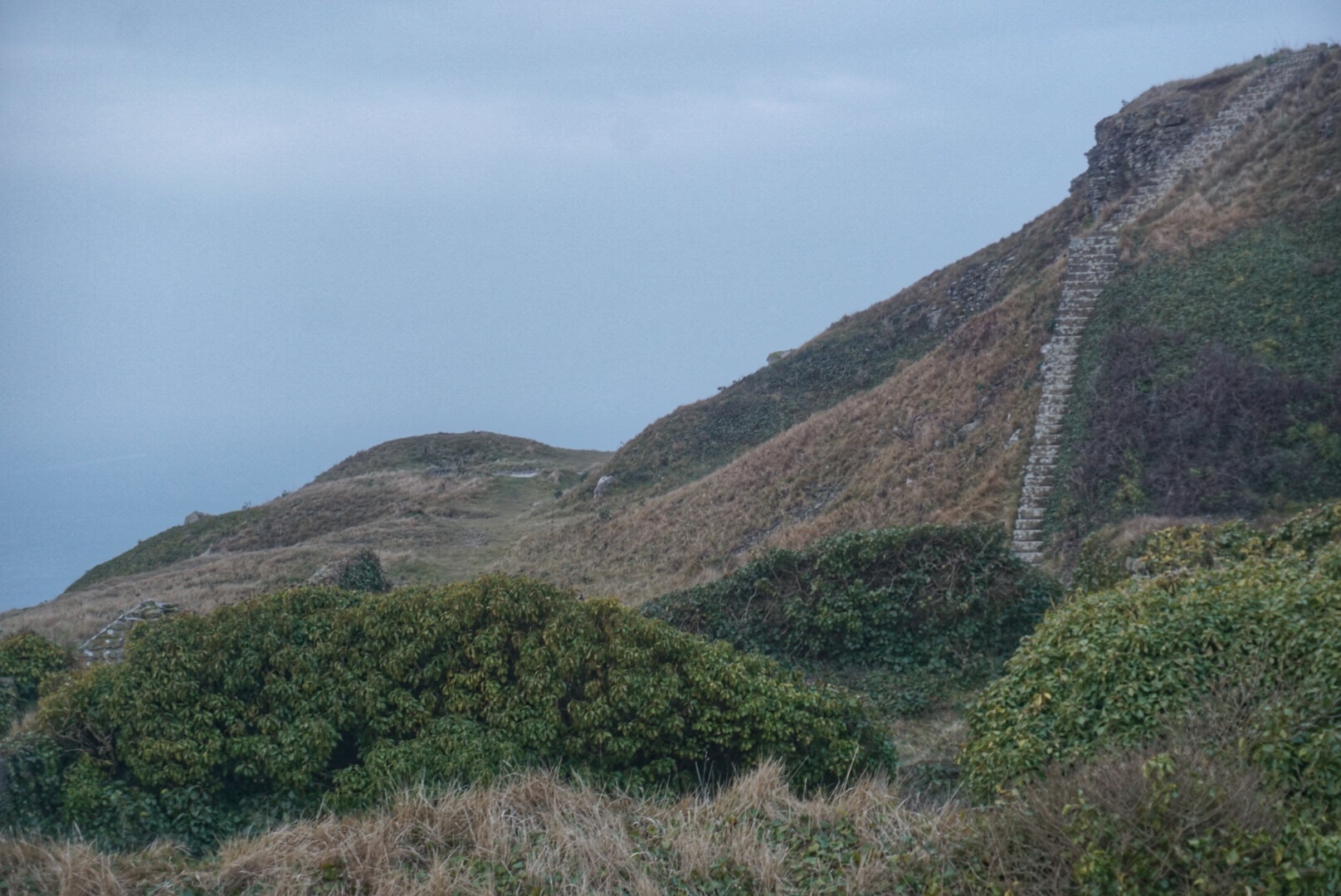 Seeing as we had walked west along the coast yesterday, we didn’t really need to follow the signs to get back to the car. But if we did they would tell us to go: 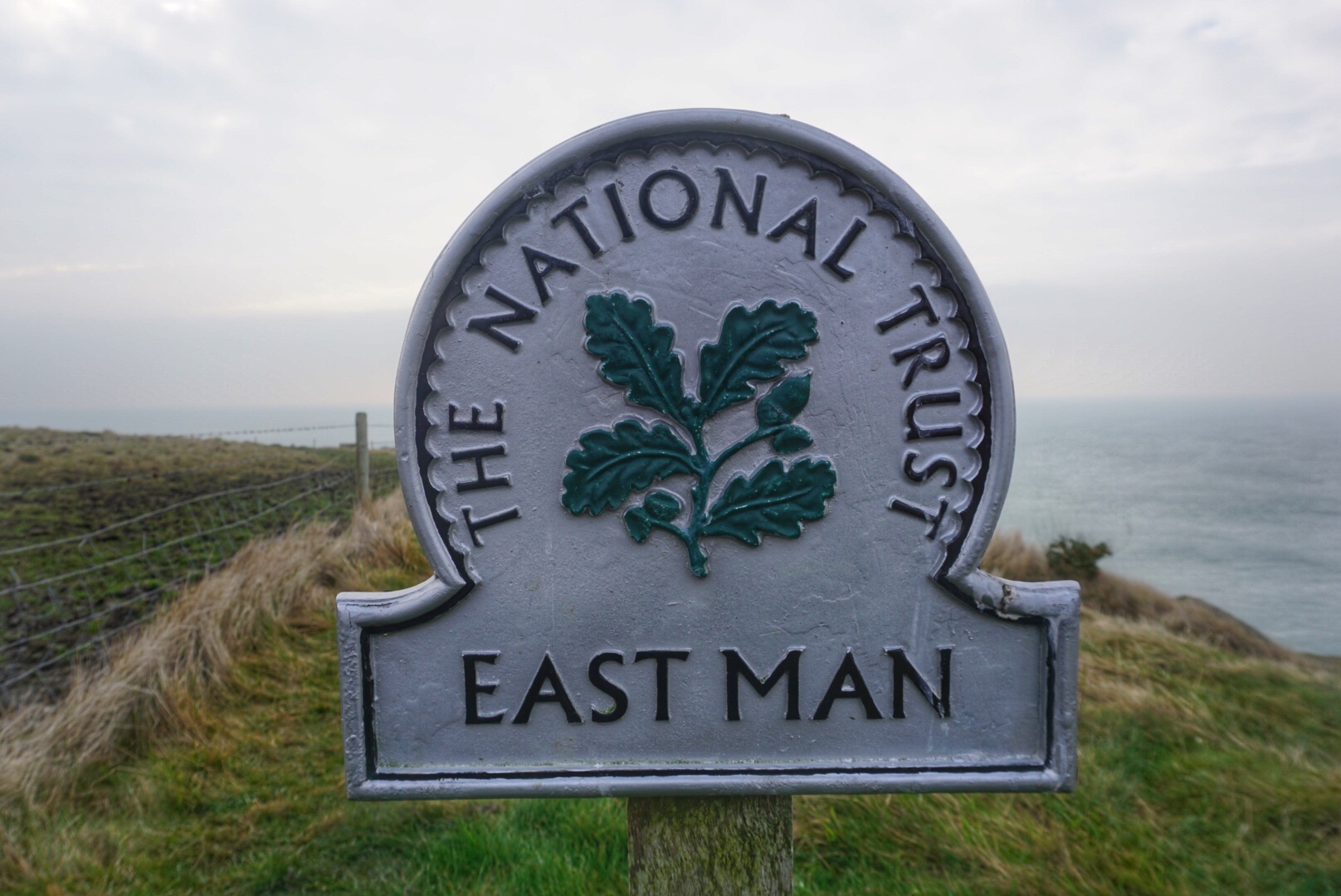 Back at the car we chatted with some enthusiastic local guys, pleased to see us out camping. It turns out there are tons of amazing little adventures to discover around here, so I hope that I make it back later this year.

We said goodbye, jumped in the car and drove back home to… 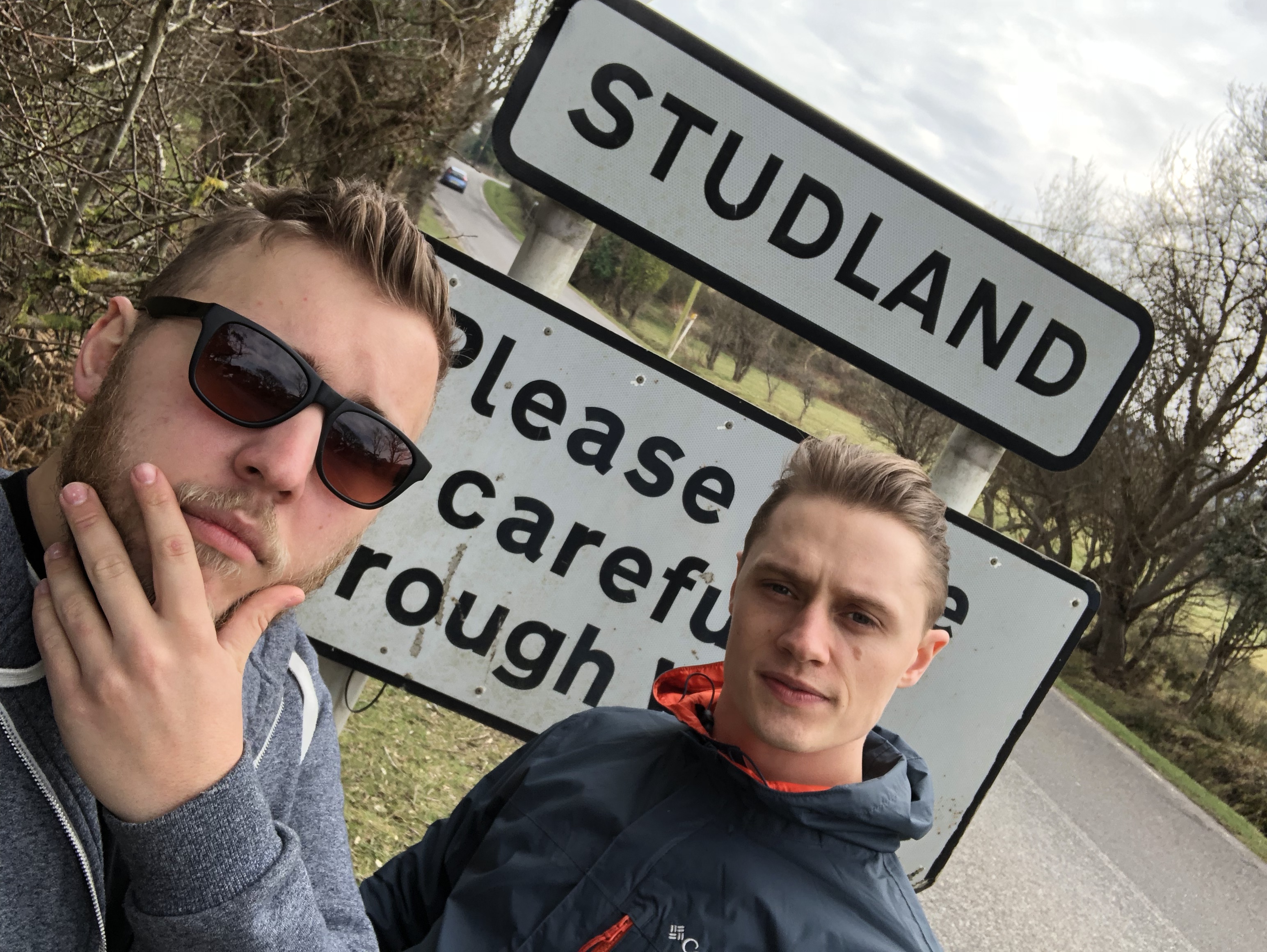