Earlier this year, 2 friends and I decided to take on a hitch-hiking challenge to raise money for a charity called ‘The Campaign Against Living Miserably’.

Last Friday Magnus, Sergio and I set off from Brick Lane with the intention of reaching the town of ‘Twatt’ on the Archipelago of Orkney – we gave ourselves 4 and a half days to get there and back.

Our first lift came from our boss, in his vintage MG.

MG’s are not very big. 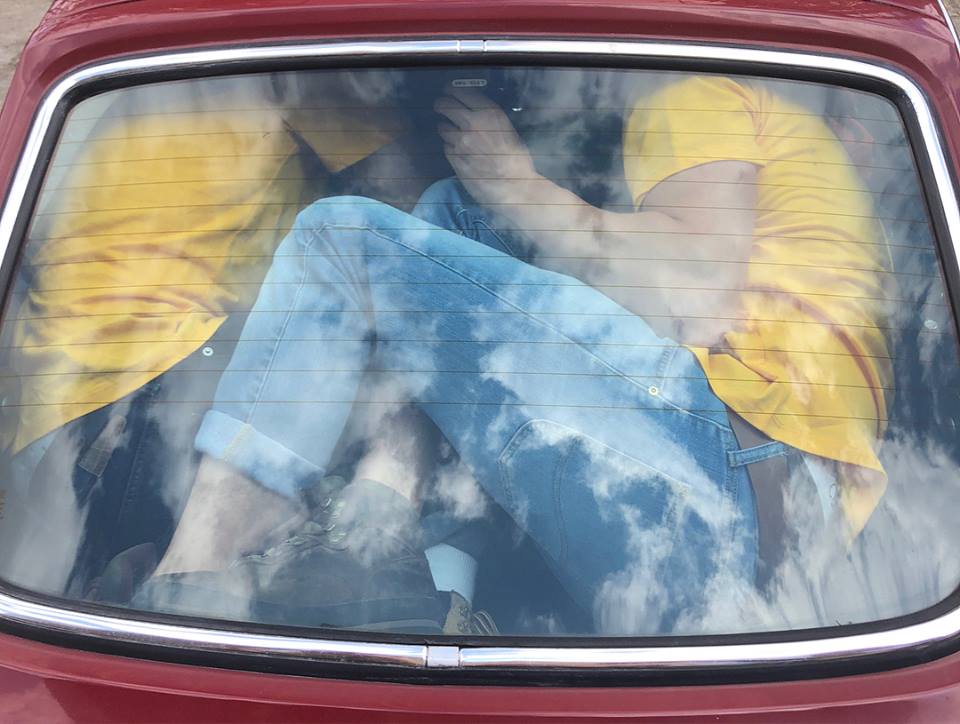 Around 15 miles into the lift, we noticed a burning rubber smell and pulled over to discover that the combined weight of us hitch-hikers had pushed the car down on to the back left tire and nearly set it alight – so we jumped out in Enfield, thanked the boss and set about flagging down a lift. 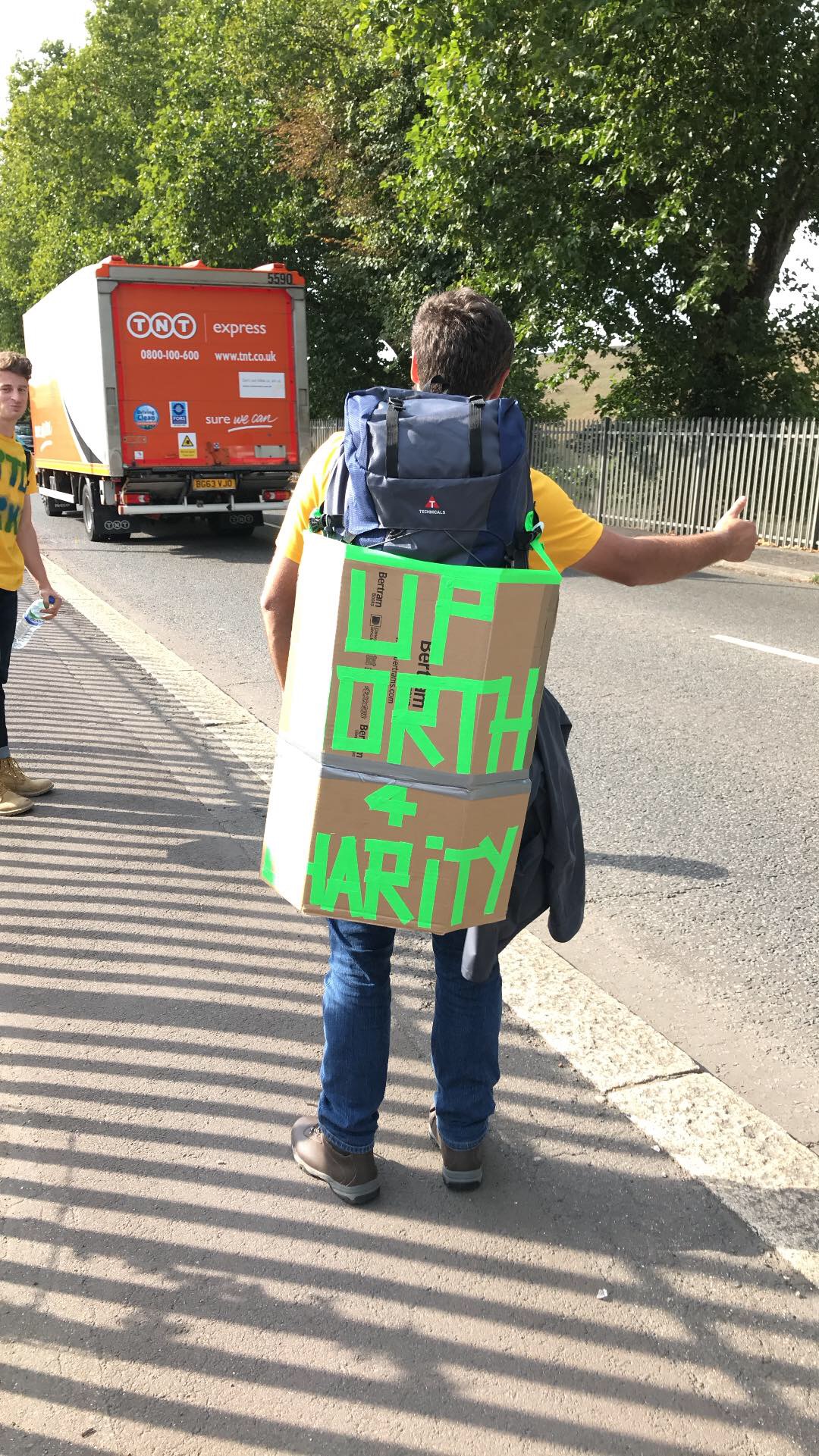 We had no luck in Enfield so we walked until we were picked up by an incredible guy called ‘Kodge’. 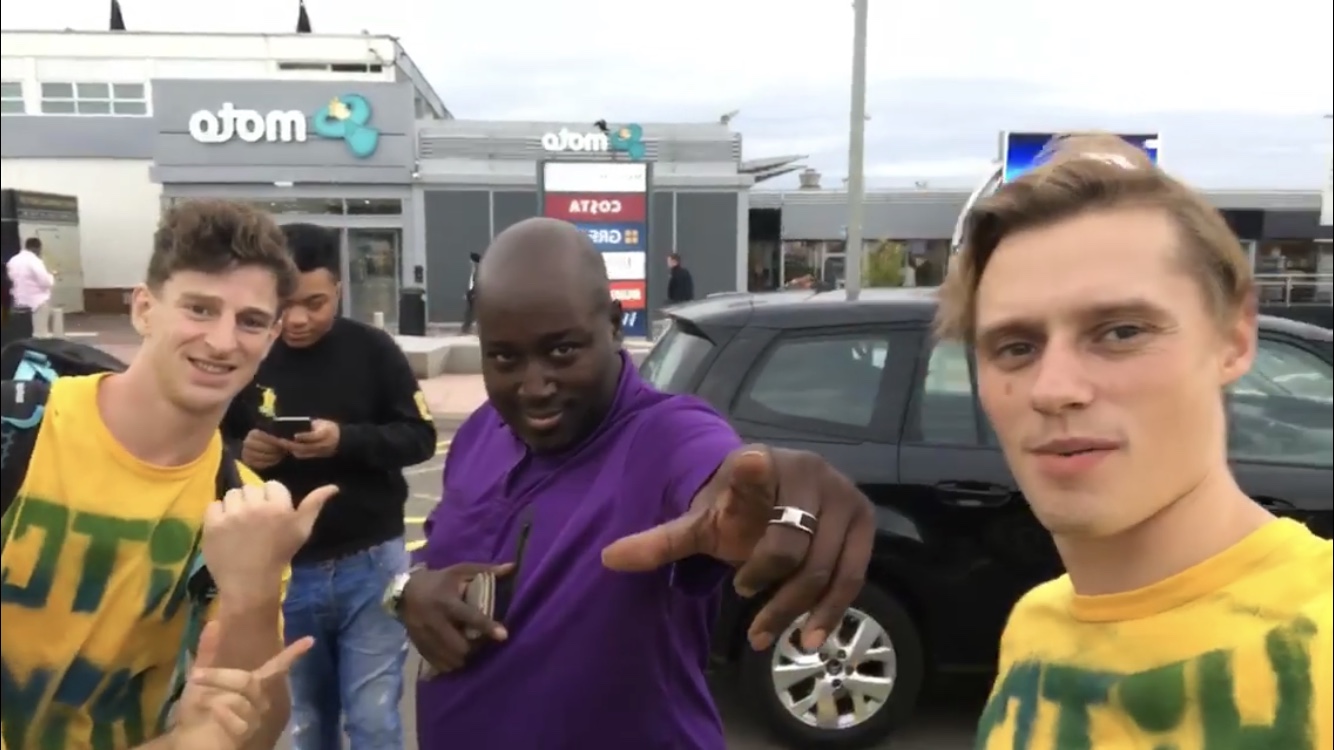 He drove us to Luton services and dropped us off with loads of encouragement and good will – which clearly paid off because 10 minutes later we were picked up by our next saviour – Hardeep. 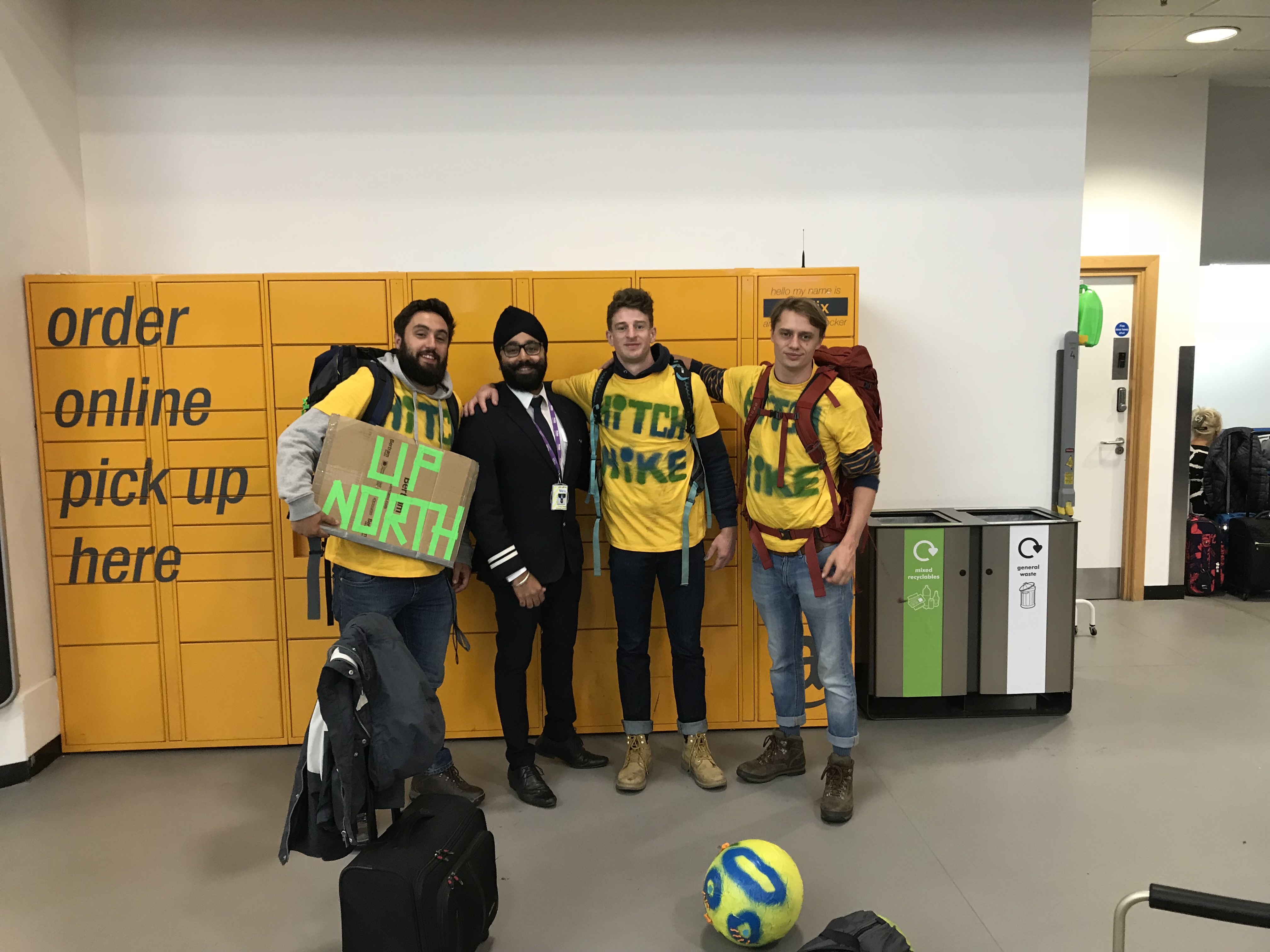 Hardeep drove us from Luton to Birmingham where he generously let us sleep on his living room floor – here it came to light that Hardeep is a pilot and this is where everything got interesting – through Hardeep’s generosity and some careful planning – the next morning we somehow managed to hitch a ride on a plane from Birmingham to Aberdeen… Yes, really… We hitched a damn plane. 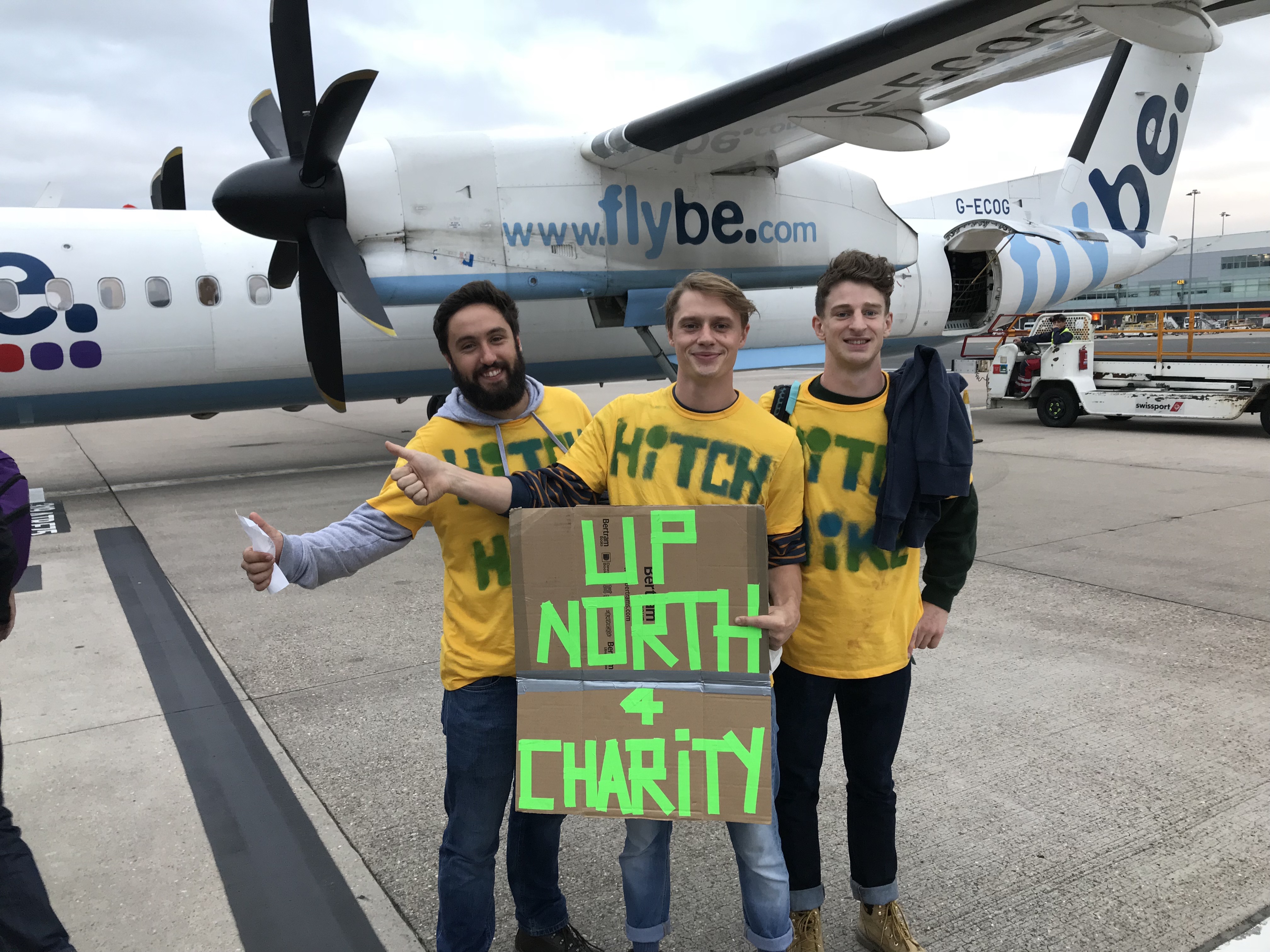 In Aberdeen, we hitched our next ride with a girl called Roxana, who dropped us in the centre of the city and pointed us in the direction of the docks where we went to talk to the lovely people at Northlink Ferries. Cheryl at Northlink Ferries very generously gave us free return tickets to Orkney which meant that we also hitched the ferry crossing!

With 6 hours to kill before the ferry left, we had a wander around the city. Aberdeen is actually a really good looking place, with some stunning architecture and interesting corners. 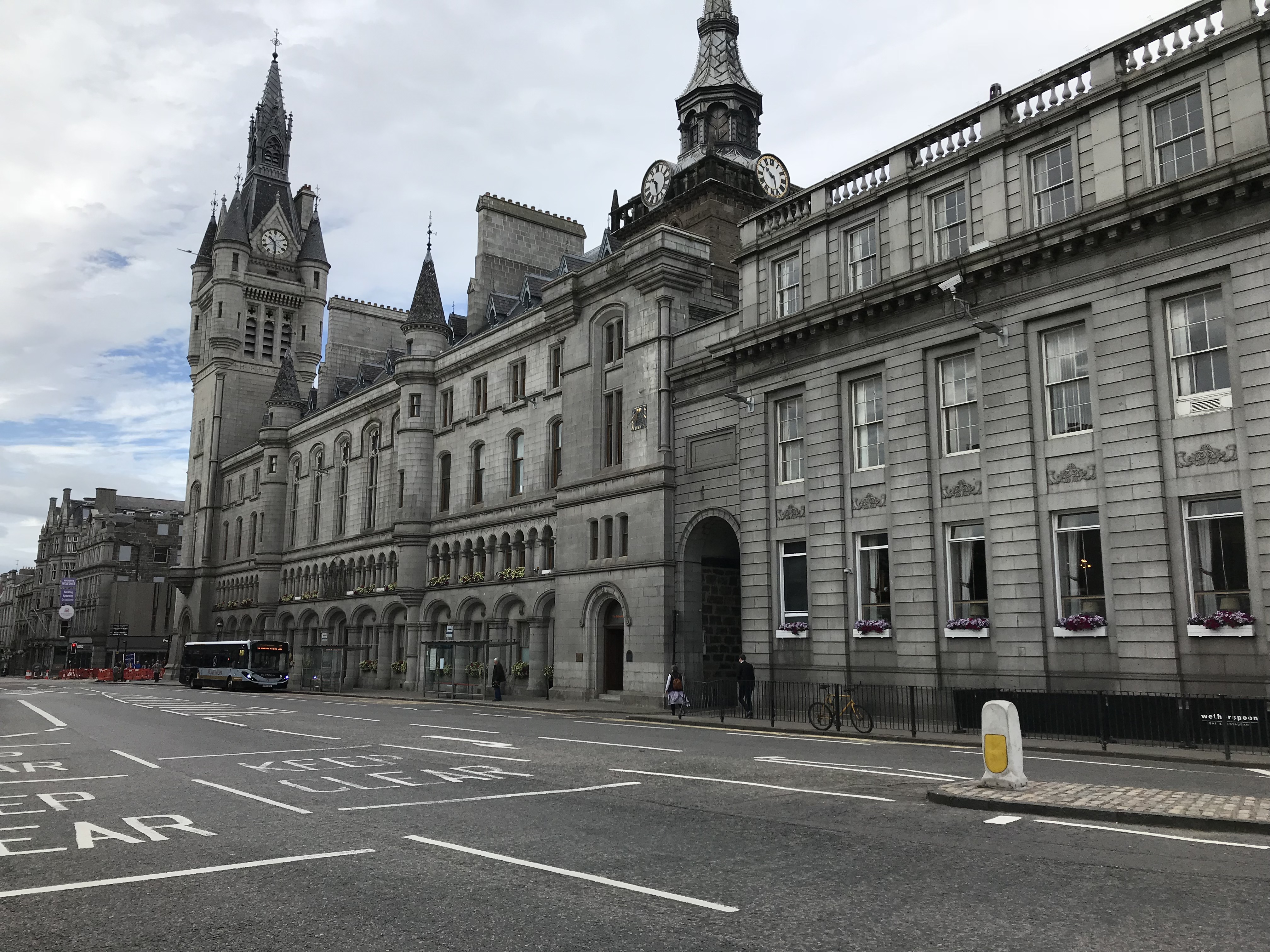 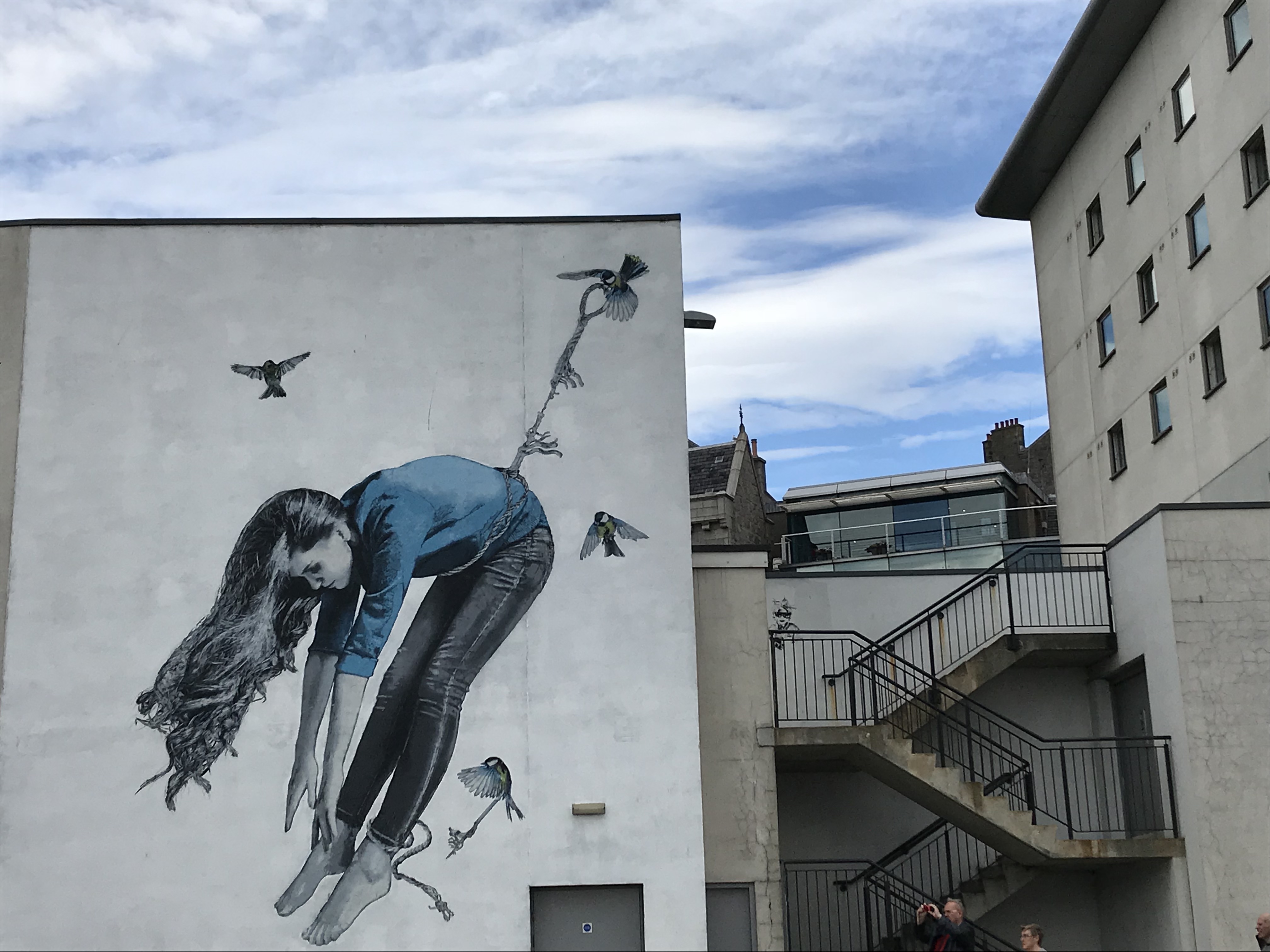 At 4.30pm, we boarded the ferry to Orkney, this took around 6 hours and got us in at 11pm.  We ate, drank and were merry the whole way (which probably contributed to no-one offering us a lift when we reached land!). 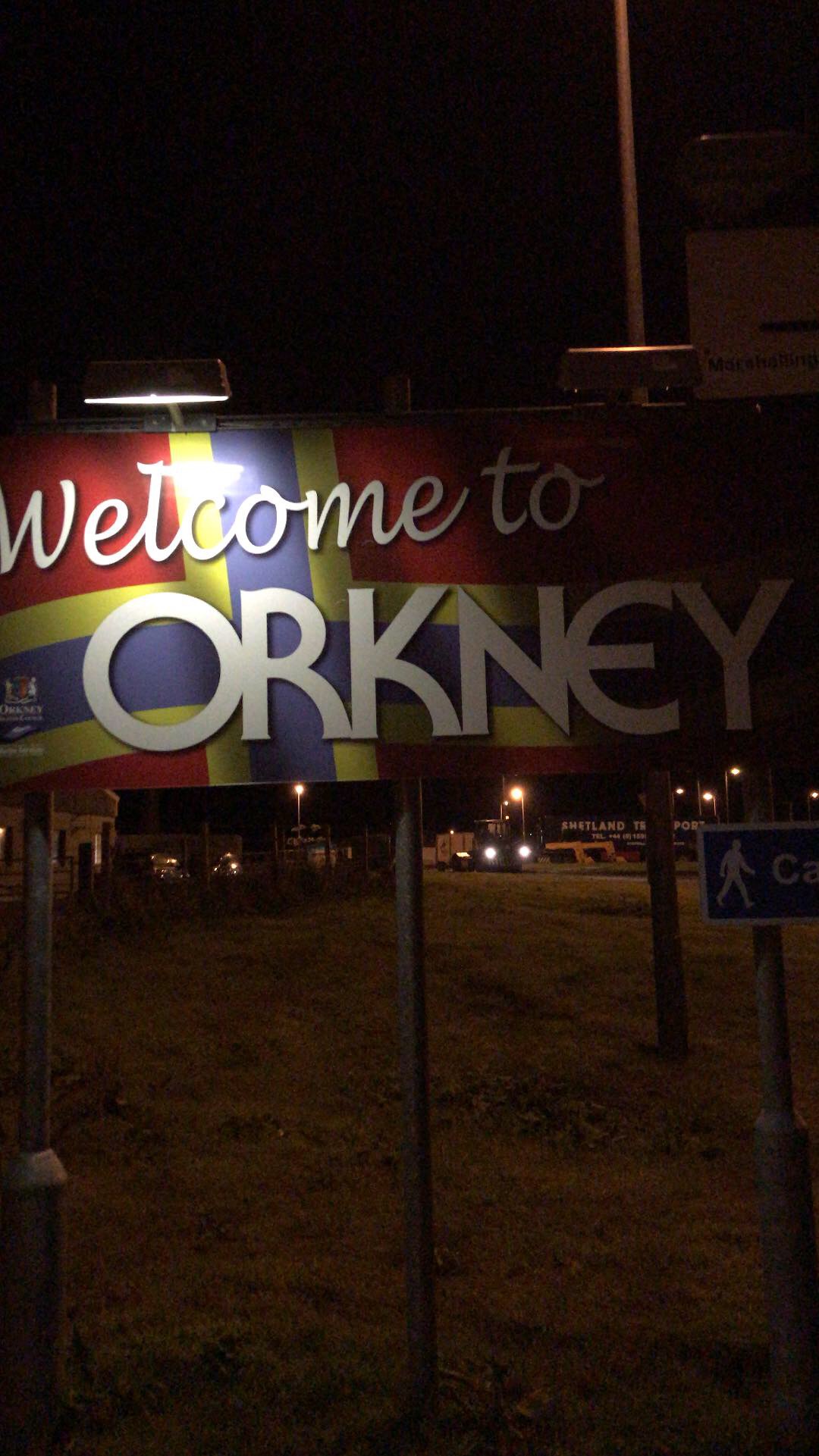 When we arrived on Orkney, it was 11pm, cold, we had only slept four hours, drank countless pints of lager and no-one was stopping to offer three boys in spray-painted yellow t-shirts a lift. So we layered up, checked the map and set off walking the last 15 miles to Twatt, with Sergio cracking jokes and Magnus dj-ing on a portable speaker.

The sign was no longer helping us and at the pace we were going, we were due to get there at sun-rise the next morning. 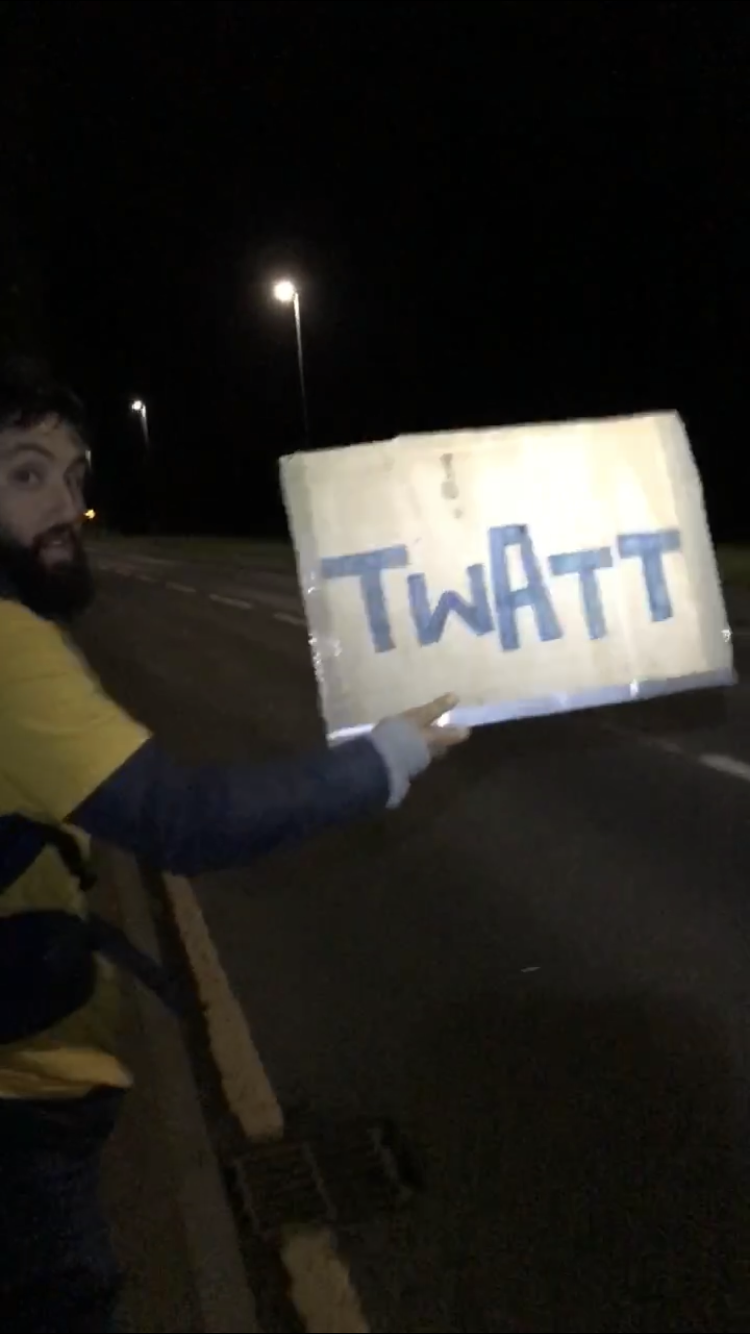 It was beautiful walking out of Kirkwall on the narrow dark roads under the stars, while dodging the passing cars.

We walked 7 miles and then the improbable happened – a car slowed, braked and stopped.

Winding down the window, a sterling chap called Kevin told us to jump in with him and his wife – Kevin and his wife live a mile away from Twatt and they drove us the remainder of the way, showed us the best place to pitch our tent and invited us round for breakfast the next morning, before heading home and leaving us to it. 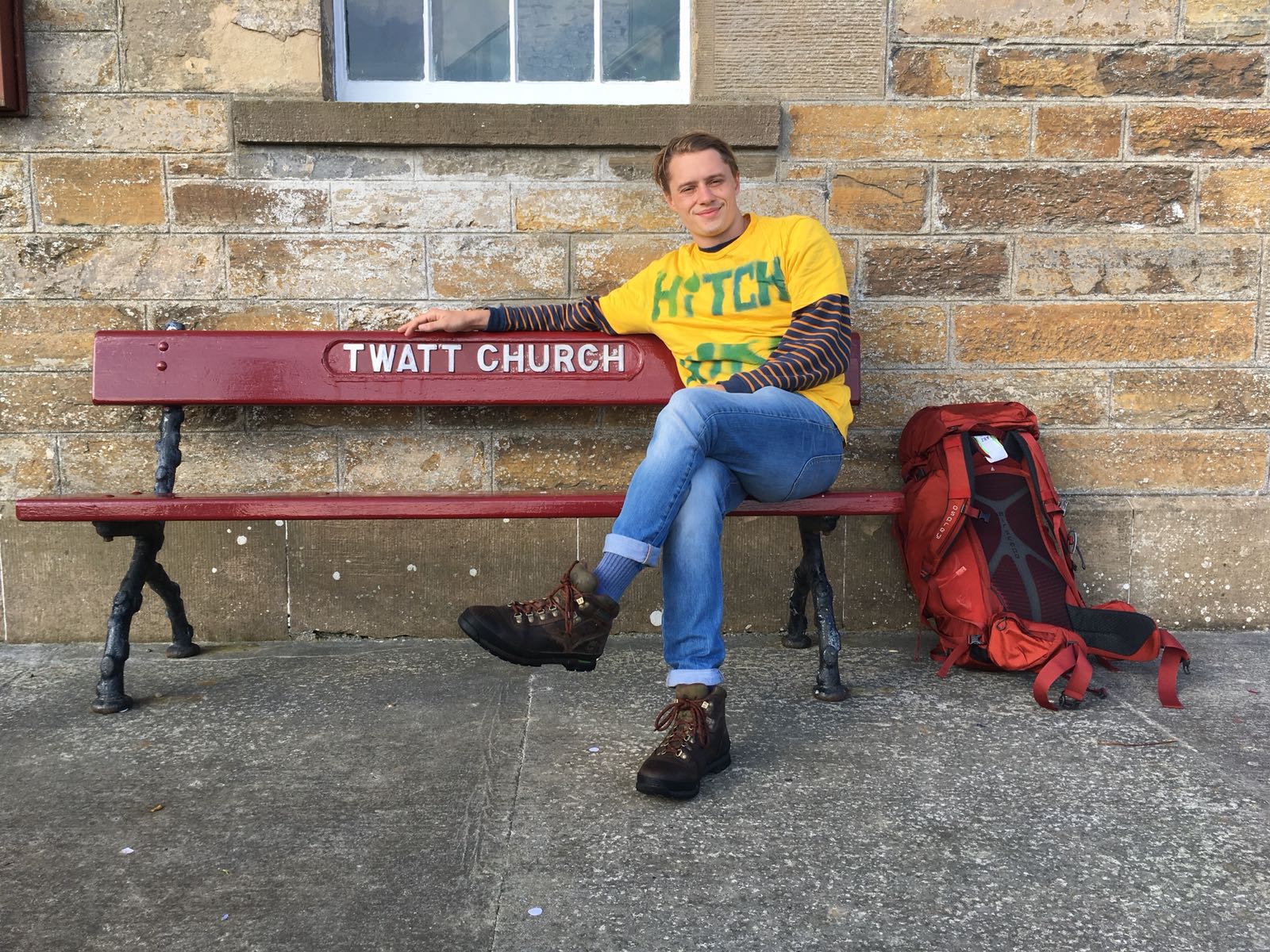 Next morning, we took some victory pictures and then headed off to Stromness to catch our ferry back to the mainland – we were given a lift by a lovely lady called Irene and her husband. 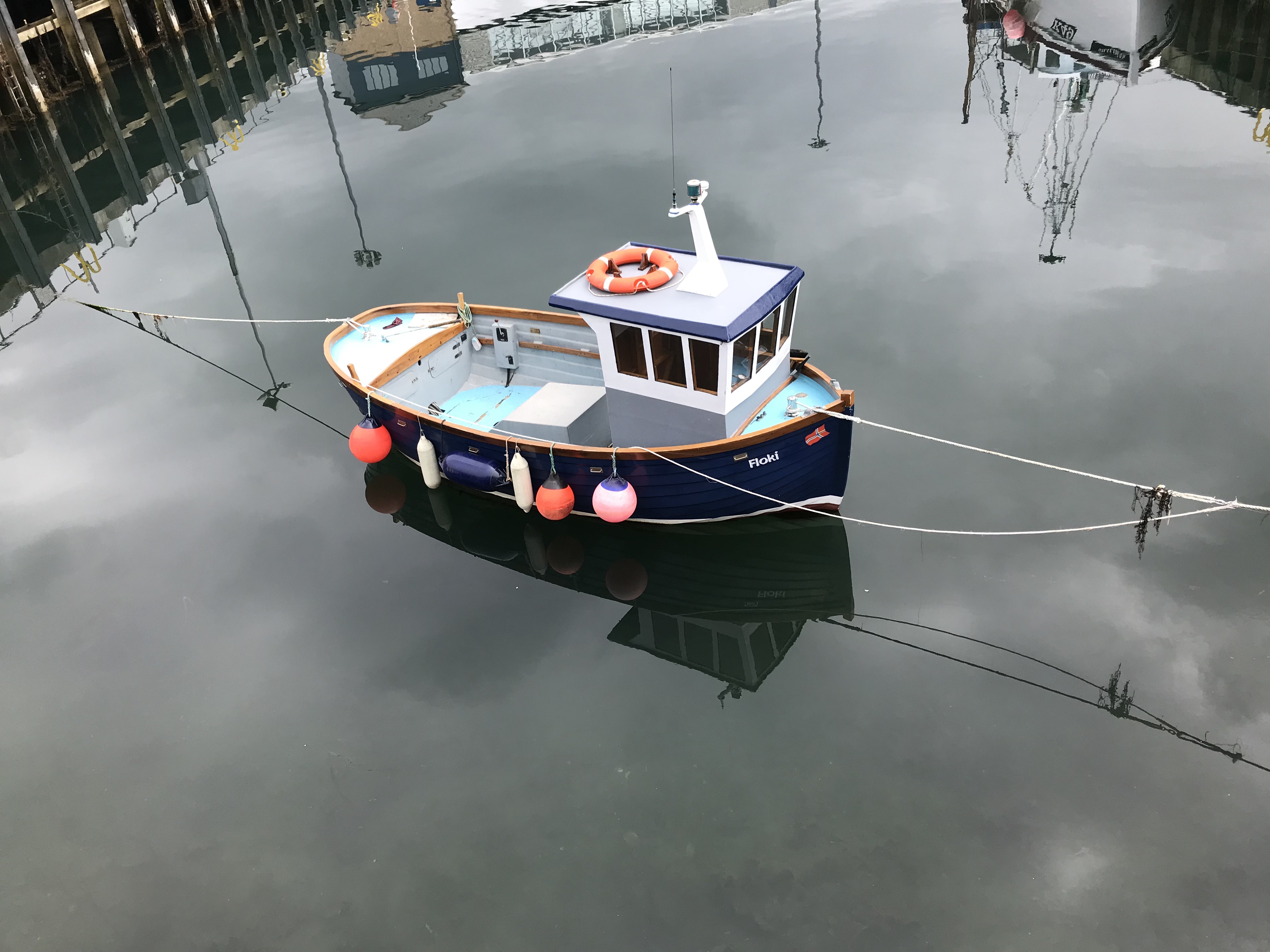 We had some spare time here and used it to have a quick dip in the sea. 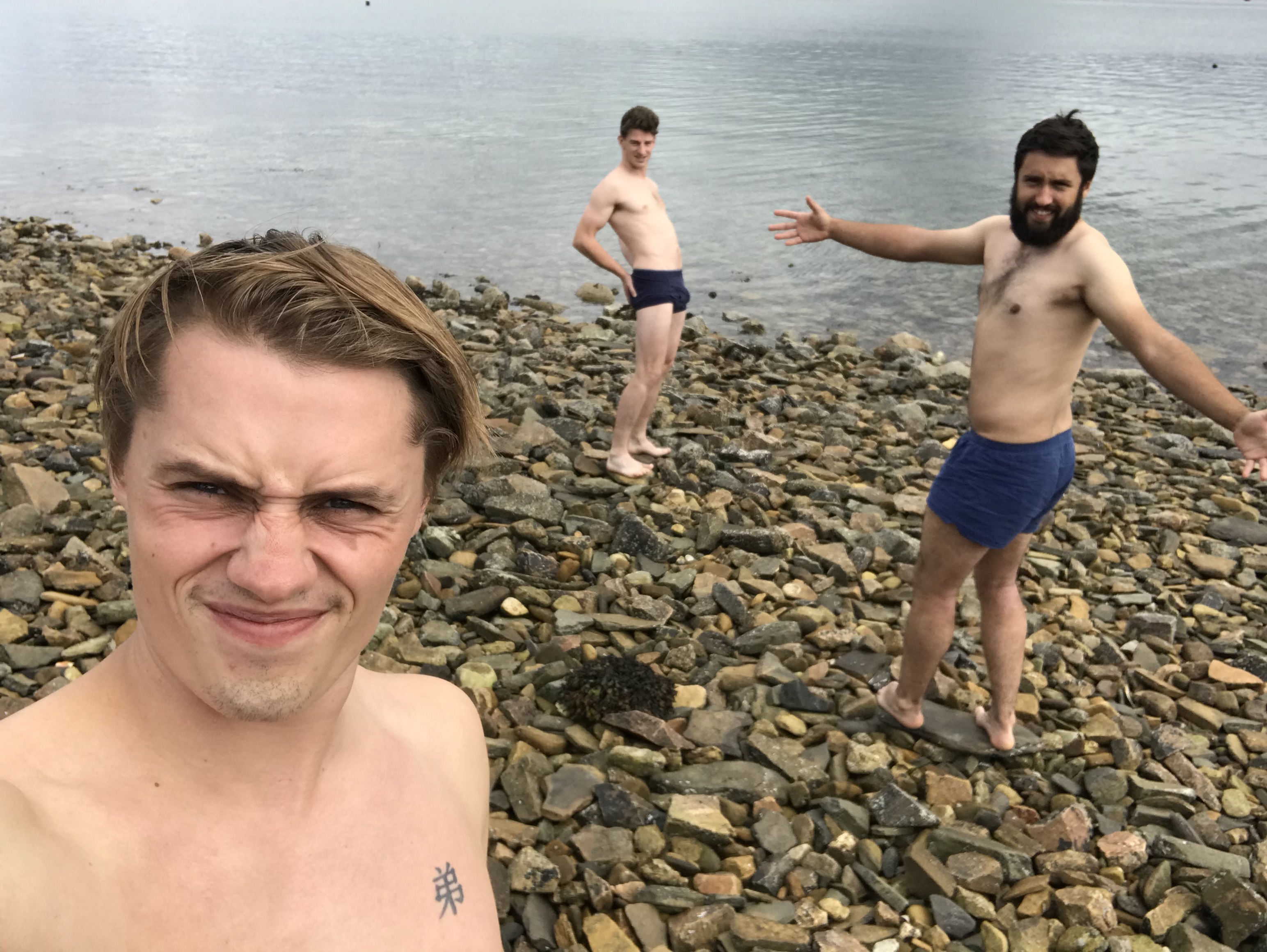 The ferry from Stromness to Scrabster is a 90 minute ride.

As soon as we landed, we set about hitch-hiking to Inverness but quickly decided that we had earned a night off, so instead we trekked up the coast and made camp overlooking the sea.

We cooked, drank, made a fire and took some time to reflect on how crazy this journey had been so far. 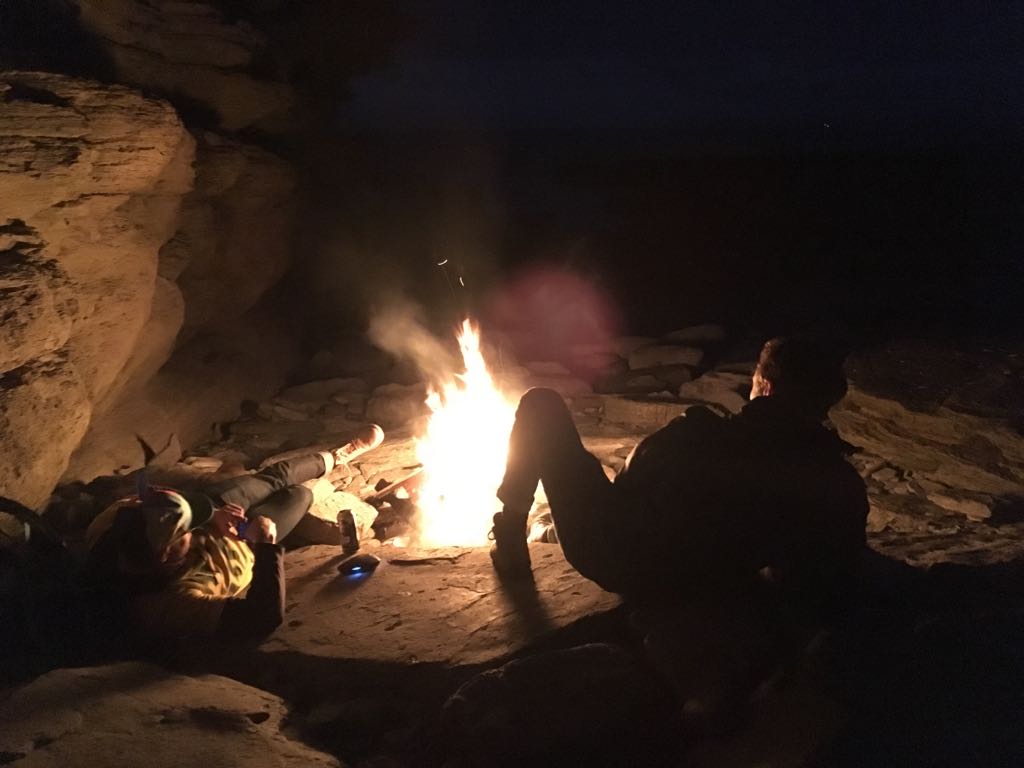 The next morning we were up and out early to start the return journey via a 12 hour over night coach from Inverness.

But mainly, thank you to these two… 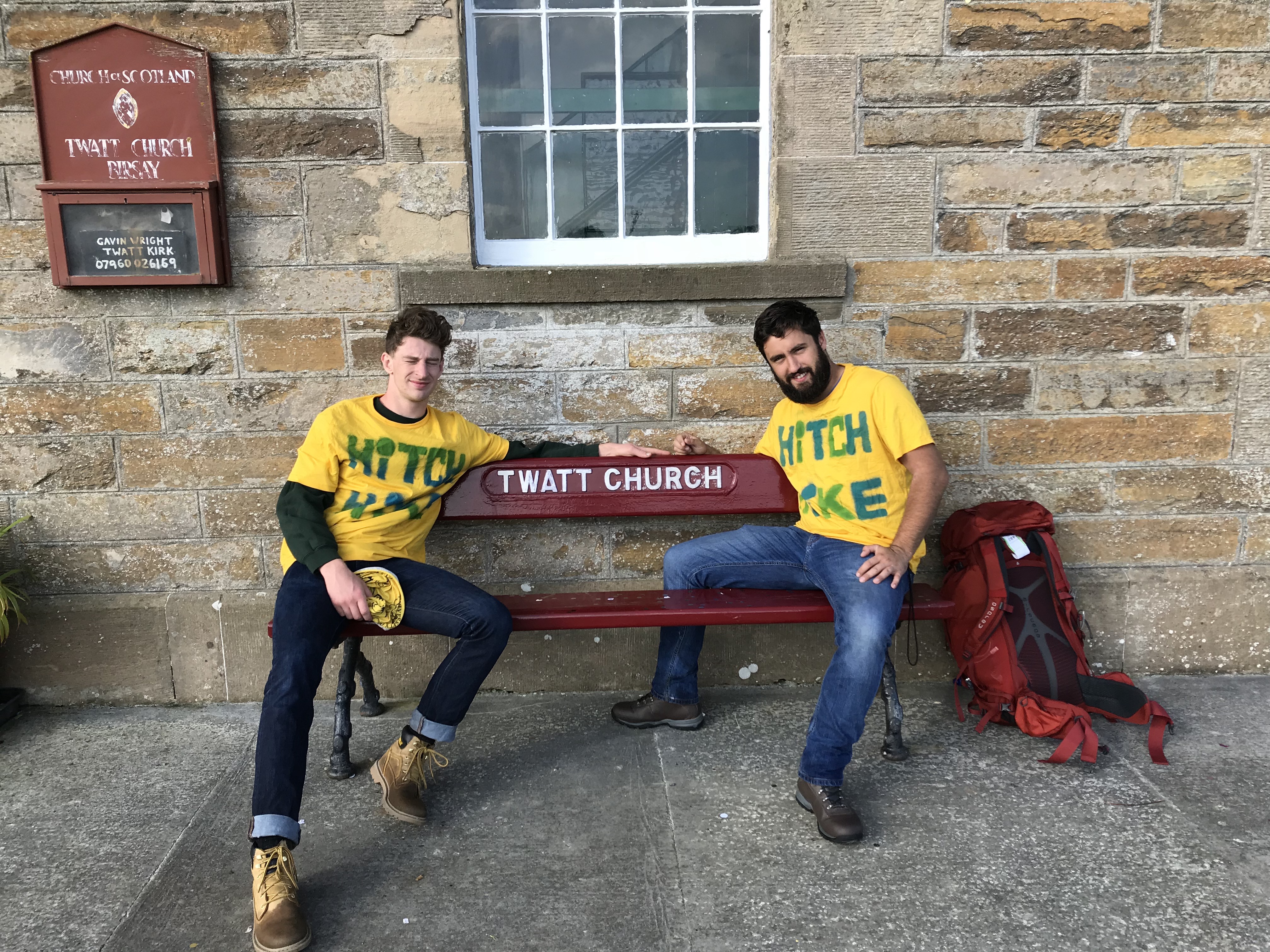 It’s not too late to donate – and my work has committed to double whatever we raise – if you’re feeling generous, you can find the page HERE.