‘Clearly my mistake was setting intelligent people a challenge and then giving them 3 months to plan’ – Robin Varley, 2018. 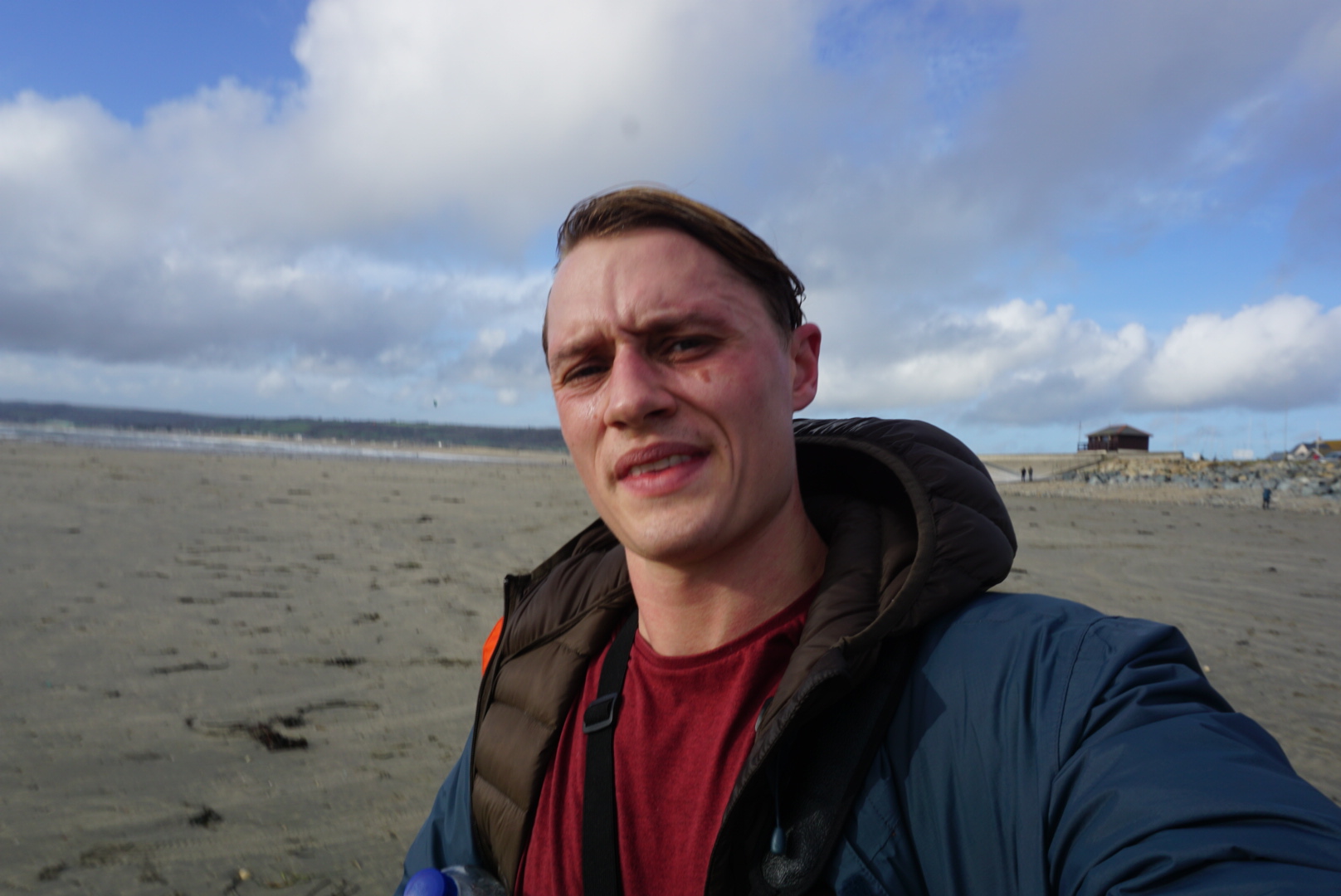 In week 30 of 52 Reflect, I set my sisters family the challenge of dropping me in the middle of nowhere, blindfolded and with no phone or money.

My task was to get back to their house using minimal resources.

Leaving them only an evening to prepare, I sensed that they were somewhat disappointed when I trundled back into their house a leisurely 5 hours after they span me around in circles for 2 minutes and left me in the woods 15 miles from their house to count to 60 while they sped off in their very comfortable and hi-tech car.

So in good sporting spirit, I granted (begged them for) a second shot and gave them 3 months to prepare… 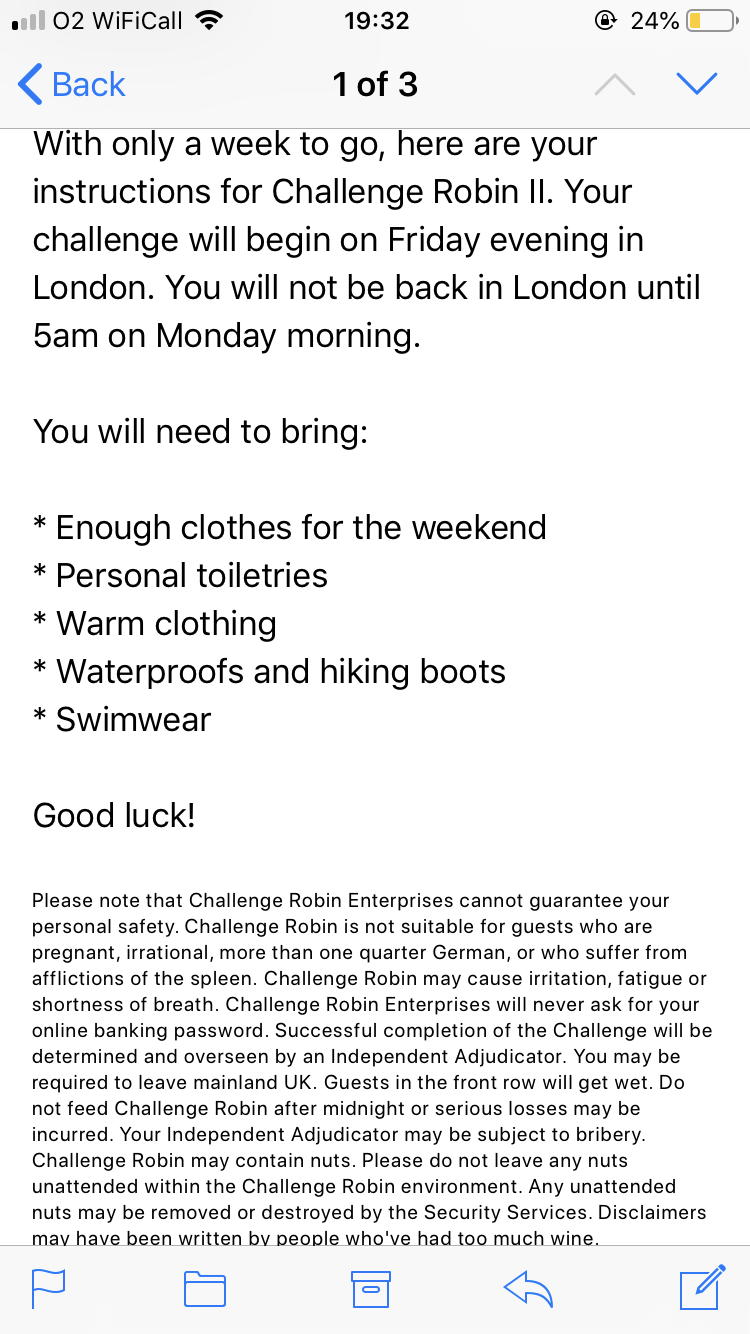 Last Monday I received this email from my sister (read the small print at the bottom, it’s brilliant).

Looking up at my warm and comfortable flat, it suddenly dawned on me that I might have bitten off more than I could chew, so I approached it in the most pragmatic way that I could think of and cast it to the back of my mind for the rest of the week.

I took a moment to fake a permission slip from my parents though. 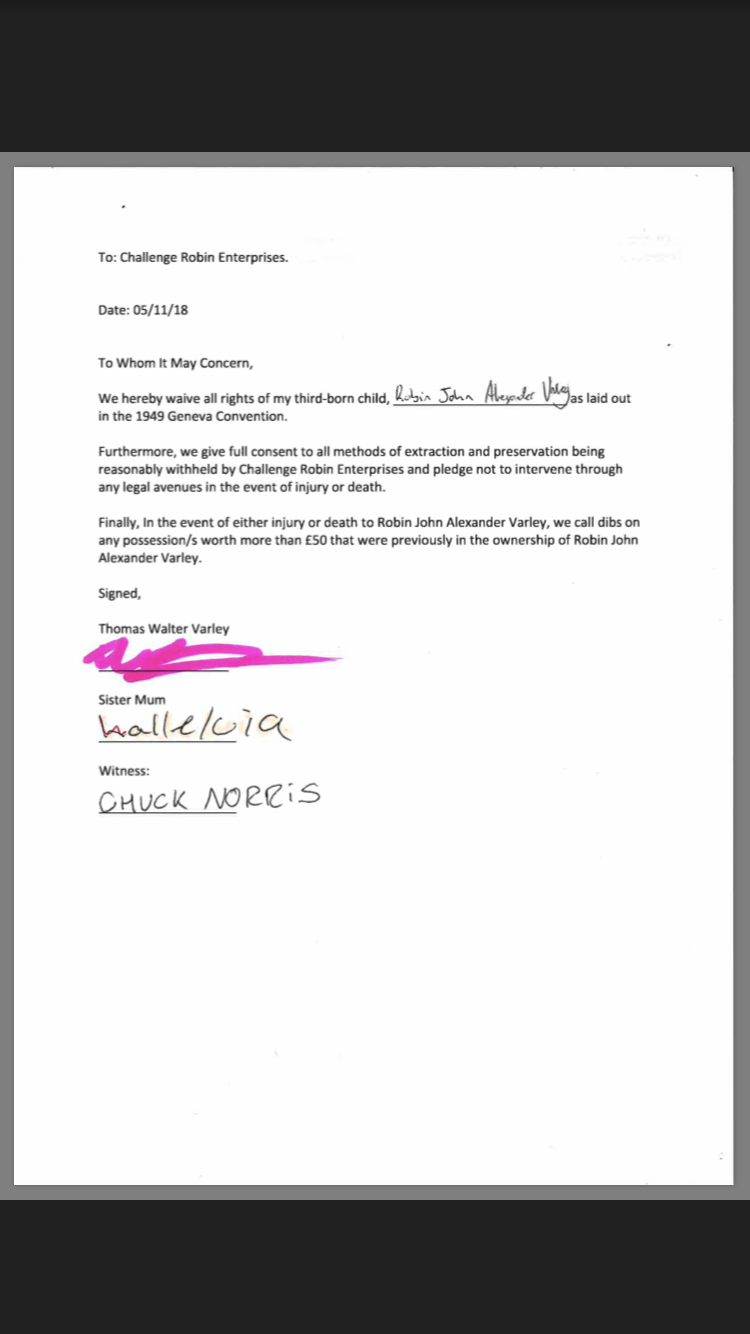 Later that week a message popped up on my phone that simply read ‘Control’.

Confused and slightly tipsy (it was a Thursday after all) I opened the message with a perplexed furrow in my brow – had o2 finally figured out a way of scaring me into reading my phone bill? was there really a god and was that god about to tell me all of my short-comings? Was I not actually tipsy and had I crossed into the realm of drink induced hallucination!?!?

No – I was being briefed on how the challenge was going to begin the next evening and before I knew it, I was feeling curiously sober and packing everything that I could find that might keep me warm and alive into a backpack. 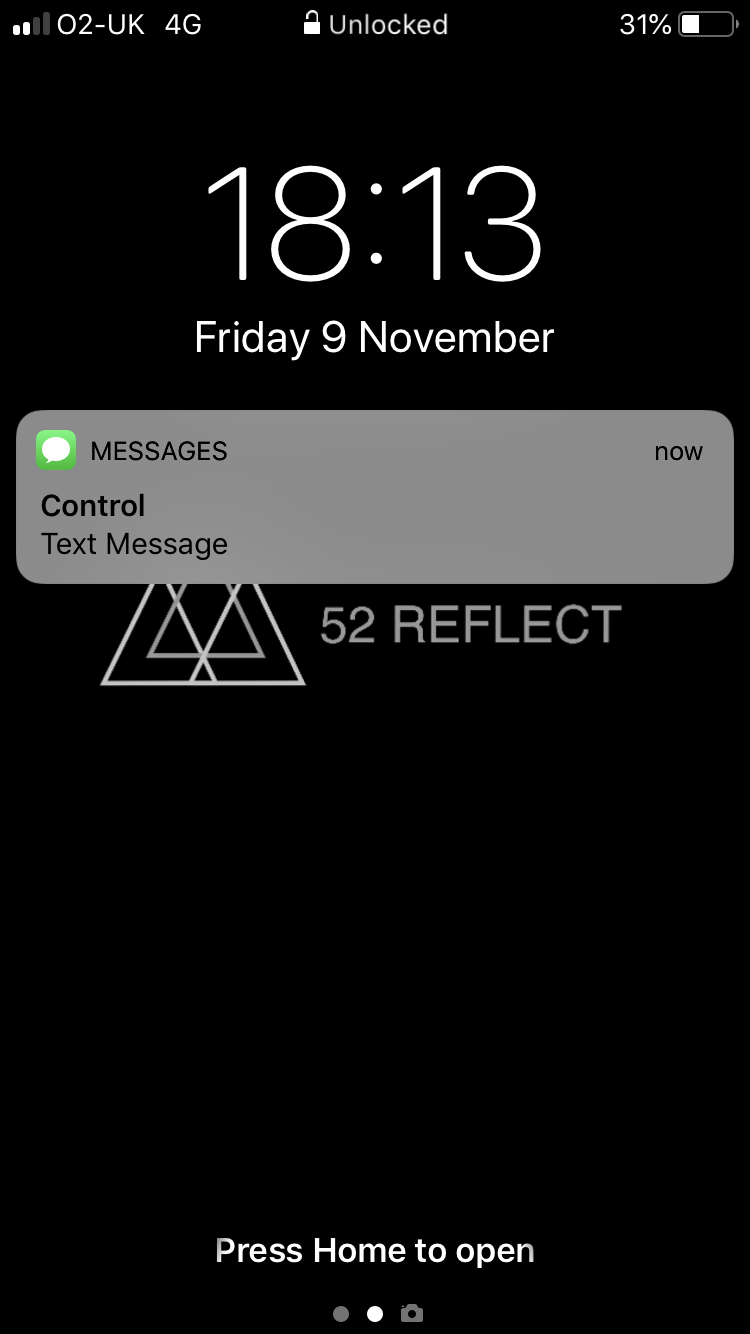 The same notification popped up on Friday, instructing me to meet agent ‘Frowny’ at a pre-advised address in Kensington that evening. I was to walk up to ‘Frowny’ (my brother in law – or someone convincingly disguised as my brother in law!) and relay the passphrase ‘I have a splitting headache’.

Frowny then handed me an ibuprofen box that contained a hand-drawn map which led me to the next clue in Cornwall Gardens… Unfortunately the map was drawn slightly wrong so I spent a good 10 minutes trying to break into somebody’s lock box that was chained to a motorbike stand, thinking that it was the next clue… Oops. 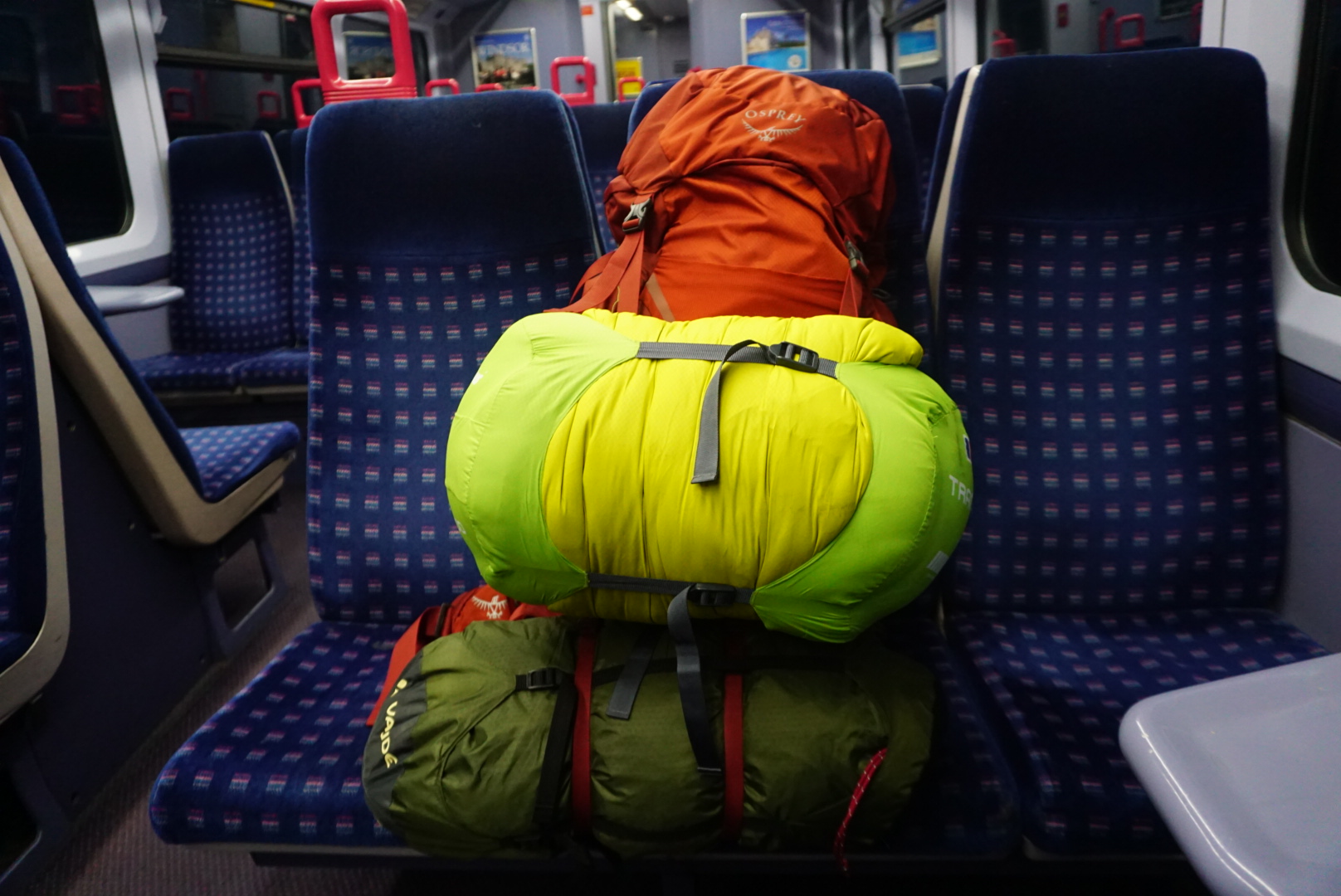 With the aid of a prompt, I found the clue and moved to the next location as instructed. Then I received an unexpected phone call from Frowny, telling me that I had 30 minutes to get to Paddington station!

After a tense turn on a Boris Bike and some slick underground navigation, I arrived with three minutes to spare.  Frowny told me that my transport for the evening had been cancelled due to a storm so they were making alternative arrangements – it wasn’t until I was told that the second train had been cancelled and we might have to call the whole thing off that I realised this wasn’t part of the challenge and that the plan was going slightly West.

We hopped on a train to Oxford and I spent 5/6 hours there before being deposited first thing Saturday morning to a station where I realised that the plan truly was going West as I boarded the first train of the day… To Penzance, Cornwall 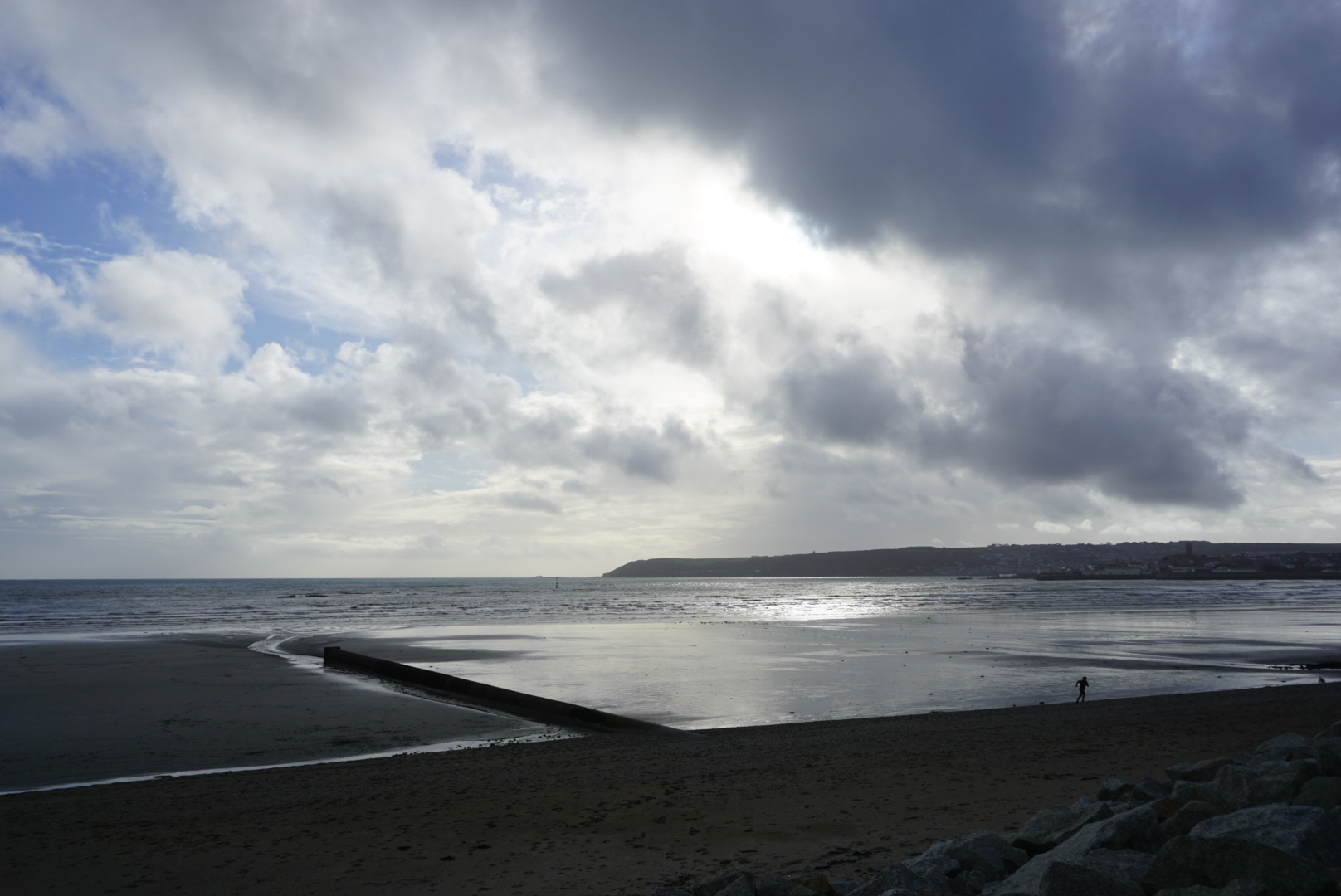 I was met here by my sisters boyfriend, Dan – who had been sent down in advance to lay traps and scheme!

Dan, being the accommodating chap that he is took one look at me and sympathetically offered to treat me to a spot of brunch – to ‘replenish’ me after the train ride. He offered to carry my bag and led me to Sullivans Diner – just over from the station – he also gave me ‘The Gadget©’ which I was told would come in handy later.

Approaching the till to order a sausage sandwich, I was handed the next clue by the owner – who was in on the whole damn thing!!

The clue was a wooden puzzle box and a laminated sheet of paper with a picture of an Island castle, sitting pretty off the shore of Marizion – the next town East of Penzance. 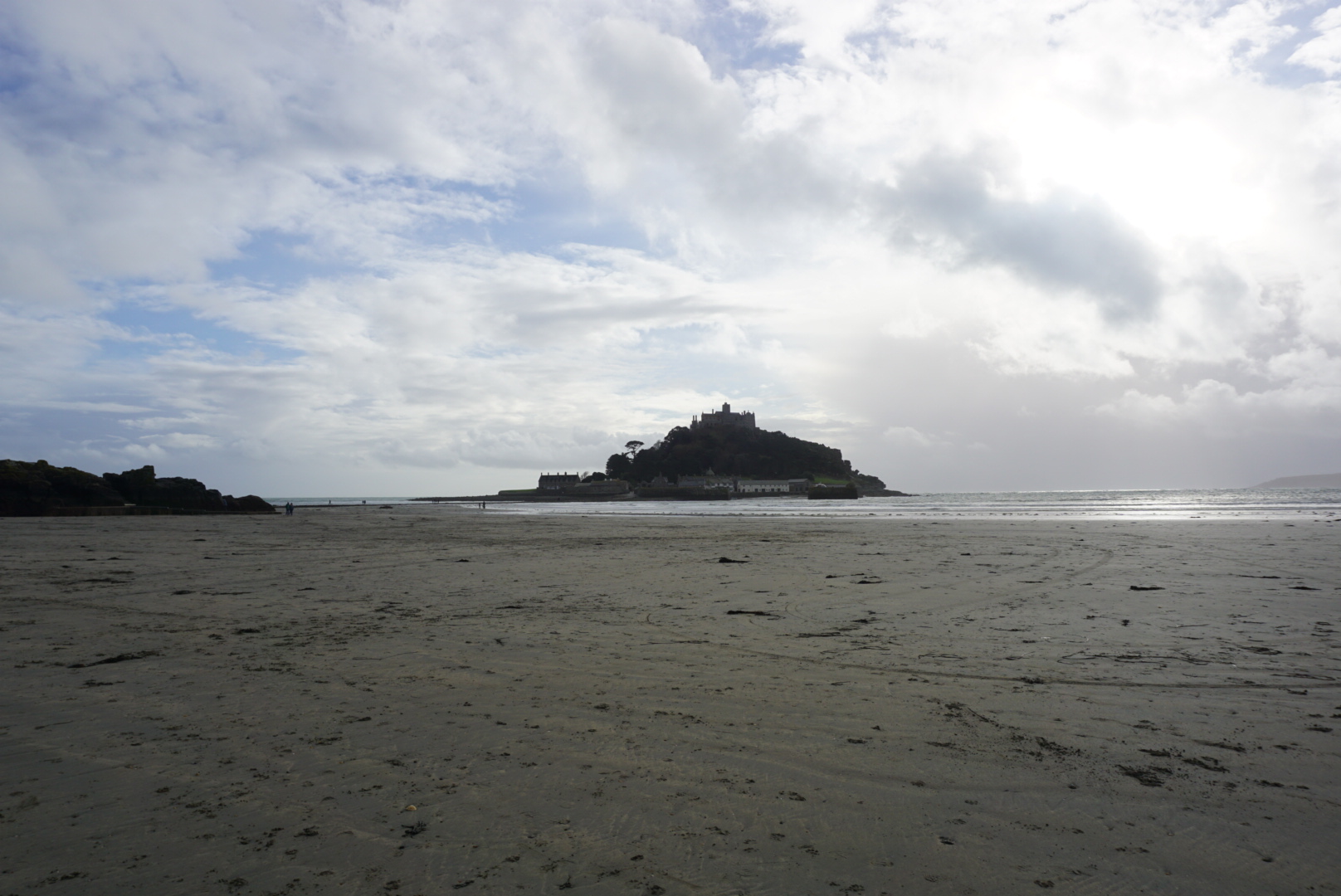 Having solved the puzzle box and as my sausage sandwich arrived, Dan explained that the Island was only accessible via a causeway at low tide *I took the first bite of my sandwich* and that I would have to access the island to find the next clue, the exact location of which was written on the piece of paper I had extracted from the puzzle box *I swallowed, took a second bite* high tide was in 35 minutes  *I stopped chewing* and it was an hours walk to the island!

Sausage sandwich and cup of tea in hand, I threw myself out of Sullivans and began an awkward eat-jog-drink-sprint, 3 and a half miles down the coast to Marazion and the stupid island (it’s actually lovely and called St Michaels Mount). 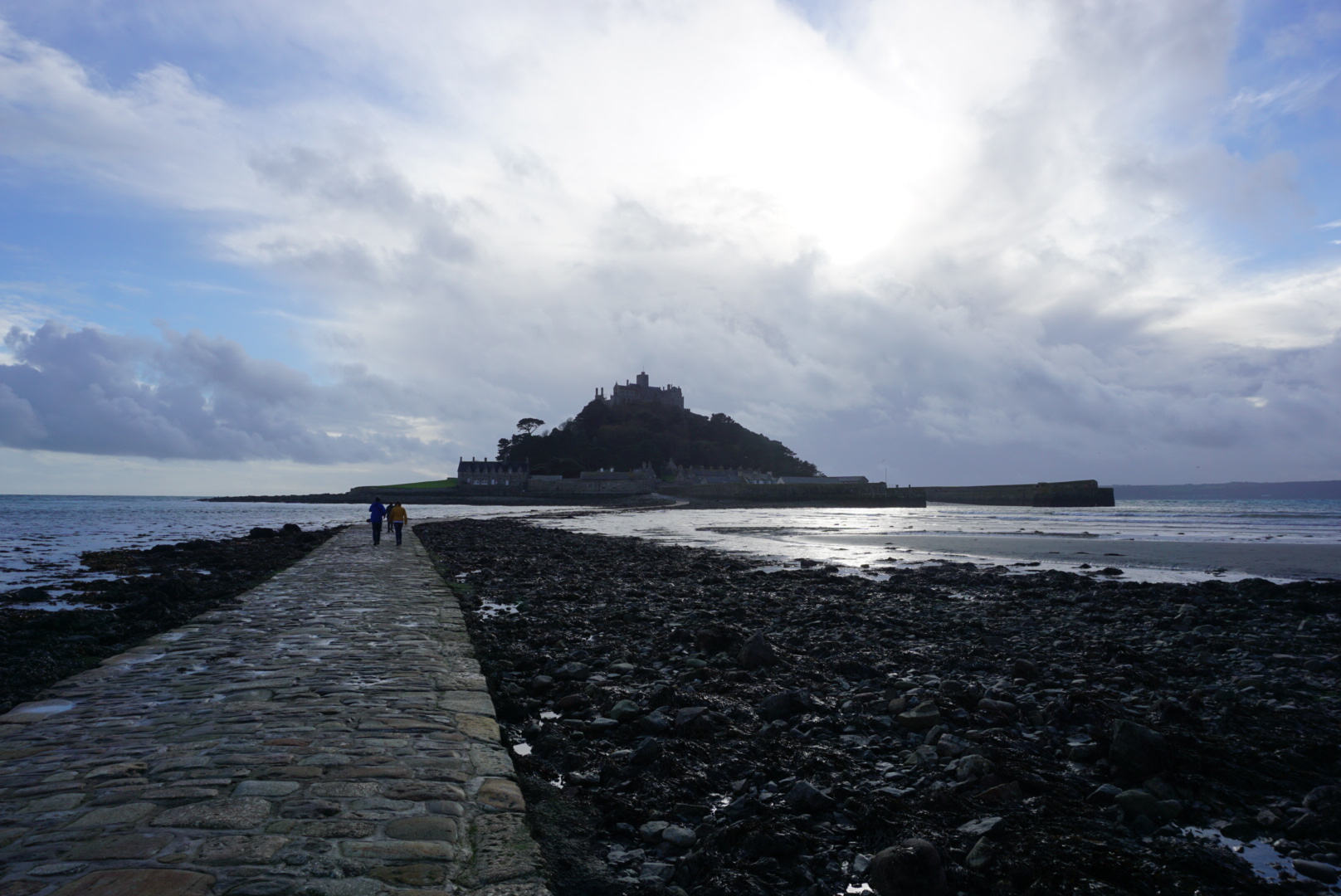 As I arrived, the first waves were starting to cross the causeway so I wasted no time in running across and finding the next clue – which was hidden under a bench – and sprinting back.

I passed some National Trust ‘officials’ as I ran back to the causeway who warned me that I wouldn’t have been allowed to cross back over had it been a minute later… Dweebs.

Having found the clue – and with slightly soggy feet – I was instructed to enter a password into ‘The Gadget©’ that Dan had handed me way back in Sullivans Diner. 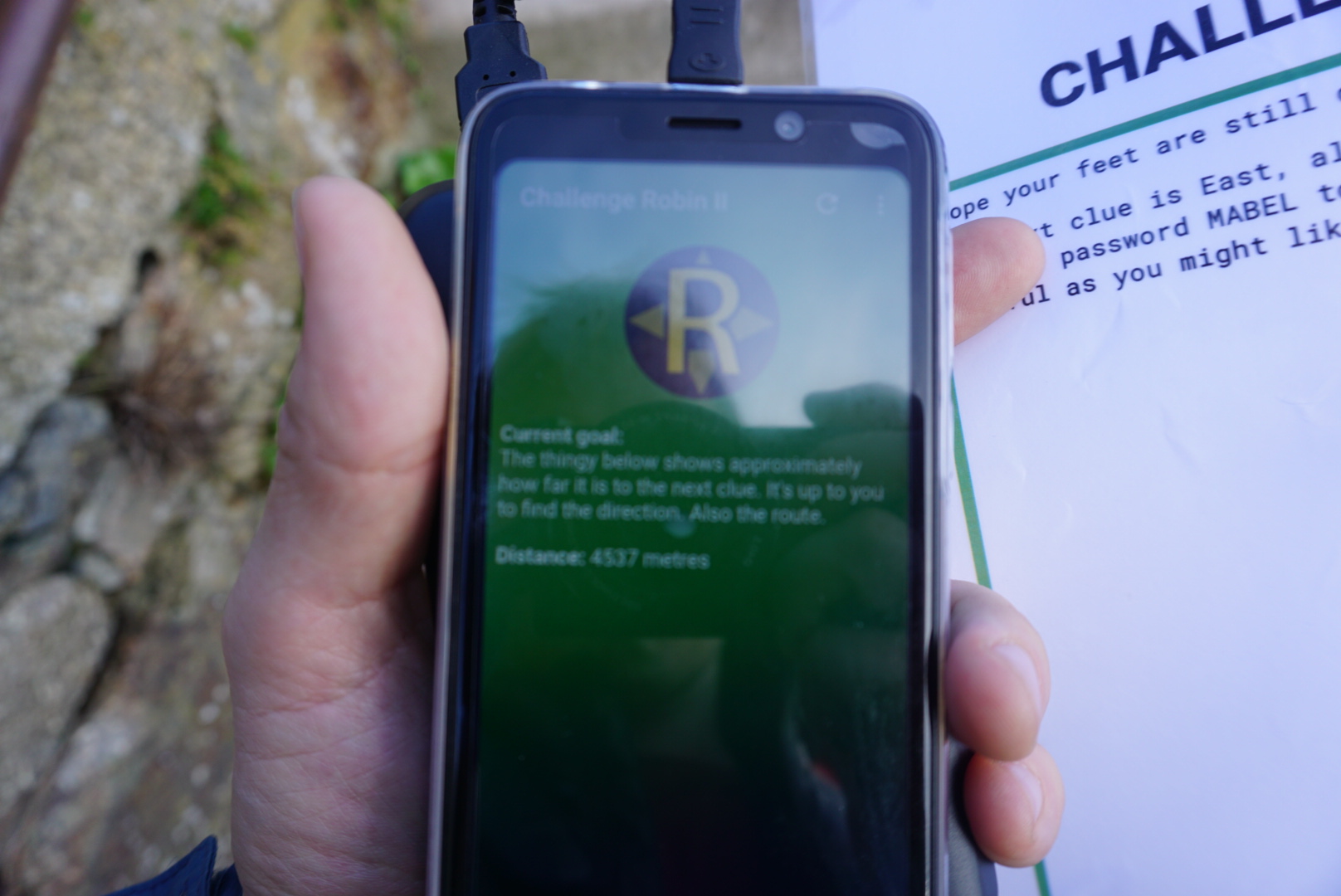 The picture above is a poorly focussed snap of a cheap smart phone that has been disabled from working as anything other than ‘The Gadget©’. It is attached to a battery pack and has been pre-loaded with an app that Dan developed – complete with R-themed branding to represent ‘Challenge Robin Enterprises’.

‘The ‘Thingy’ below shows approximately how far it is to the next clue. It’s up to you to find the direction. Also the route.

As I moved West, the metres increased. As I moved East, they decreased – East it was – I continued. 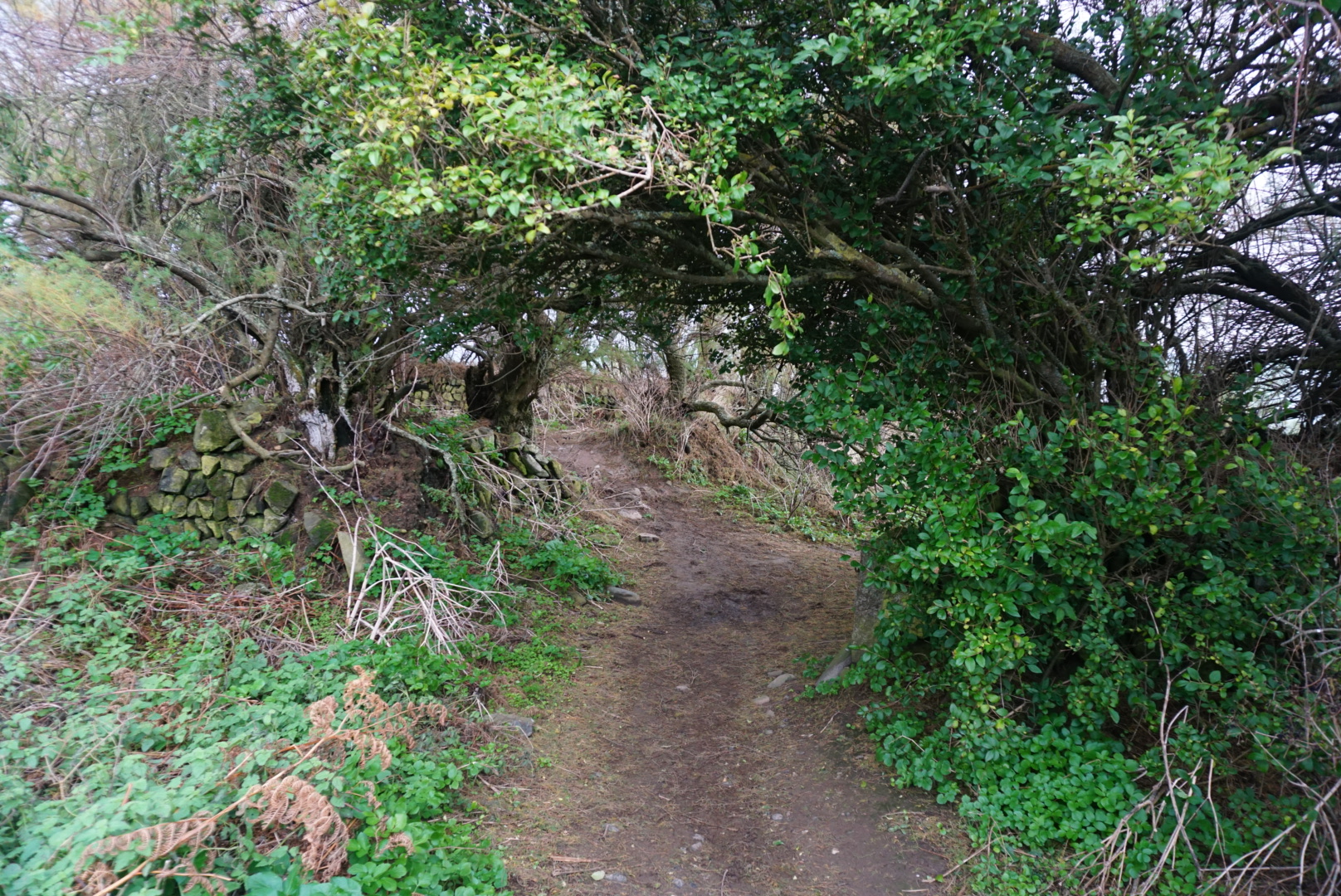 The countryside out here is incredibly beautiful and it was nice to finally enjoy it at a reasonable pace. The train-stopping-storms of the previous day had passed and it was great feeling slightly lost on this winding stretch of coast – and then ‘The Gadget©’ malfunctioned.

I pressed the ‘call for help’ button and ‘Control’ (Dan) cursed the lack of 4G signal and offered me an alternative.

Loaded with the coordinates of the next clue, I found what I was looking for around a mile later and opened up an ammunition can that was nestled between some rocks on Prussia Cove to find a map with a circle drawn on it. The circle vaguely highlighted where I would be sleeping that night. The puzzle box contained the exact location of where I was staying and the ammo can also contained a bag of unattended nuts, that had not been destroyed (again, see the small print from the original email!). 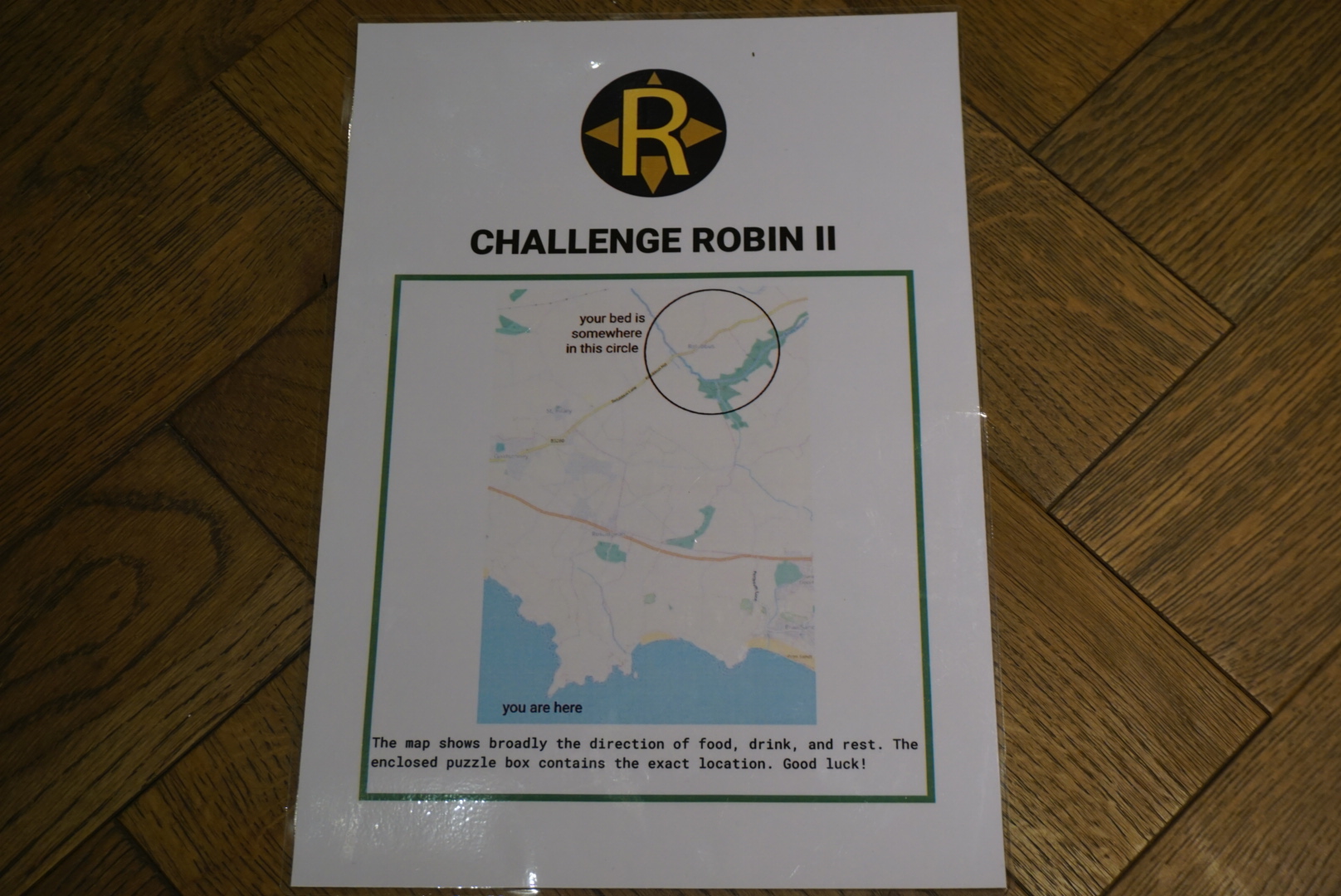 Stopping in at a pub that I stumbled across as the sun began to set, I ordered a pint and attempted to explain what I was in the midst of doing to some bewildered looking locals that all promptly drank up and left, leaving me alone to bore the barmaids’ head off with my now in-depth knowledge of puzzle boxes.

As I began my final 2 mile walk, the last of the light disappeared and I was left wading through ankle-deep sludge in a swamp that led to the place that I was due to sleep.

Coming to a river, I made a left and followed it all the way down until I heard Dan shout ‘He Made It’ from the window of a caravan, while pointing a camera in my face and welcoming me into the warmth with beer, steak pie, a hot tub and all the details of the last 48 hours from his point of view – which are brilliant and can be read in full HERE.

My family are the best… 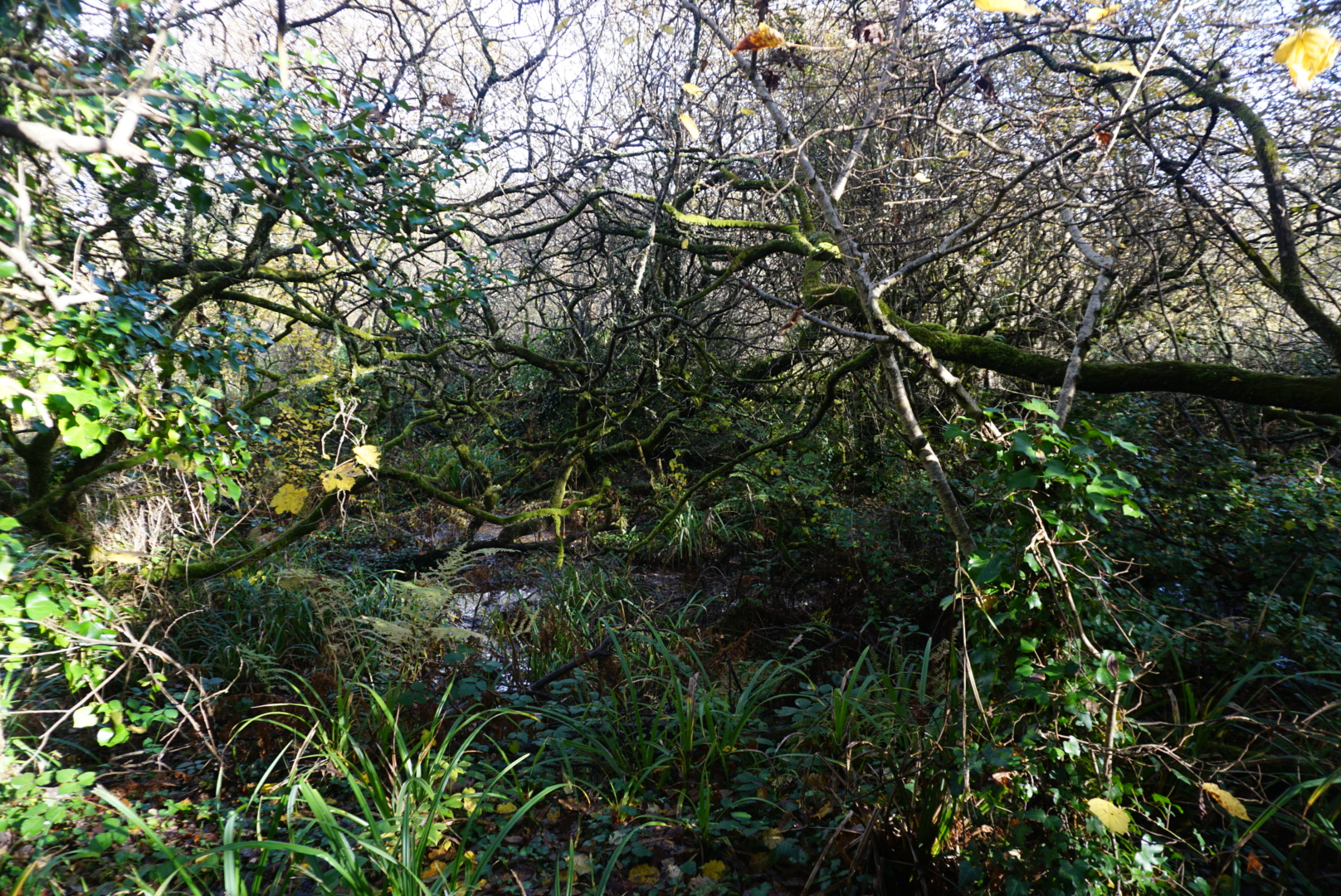 Next morning, we explored the local area by doing some Geo Caching (GPS based treasure hunting)  – which took us back along the swamp and opened our eyes to even more stunning Cornish scenery.

Also, Dan bet me a tenner that I couldn’t jump the river beside the caravan site

He was almost right.

After one final turn in the hot tub, it was time to leave.

Dan and I enjoyed a hearty meal at Wetherspoons in Penzance before he handed me over to Great Western Railways to be tucked up on the sleeper train back to London, arriving back into Paddington at 5am on Monday morning, in time for work at 9am. 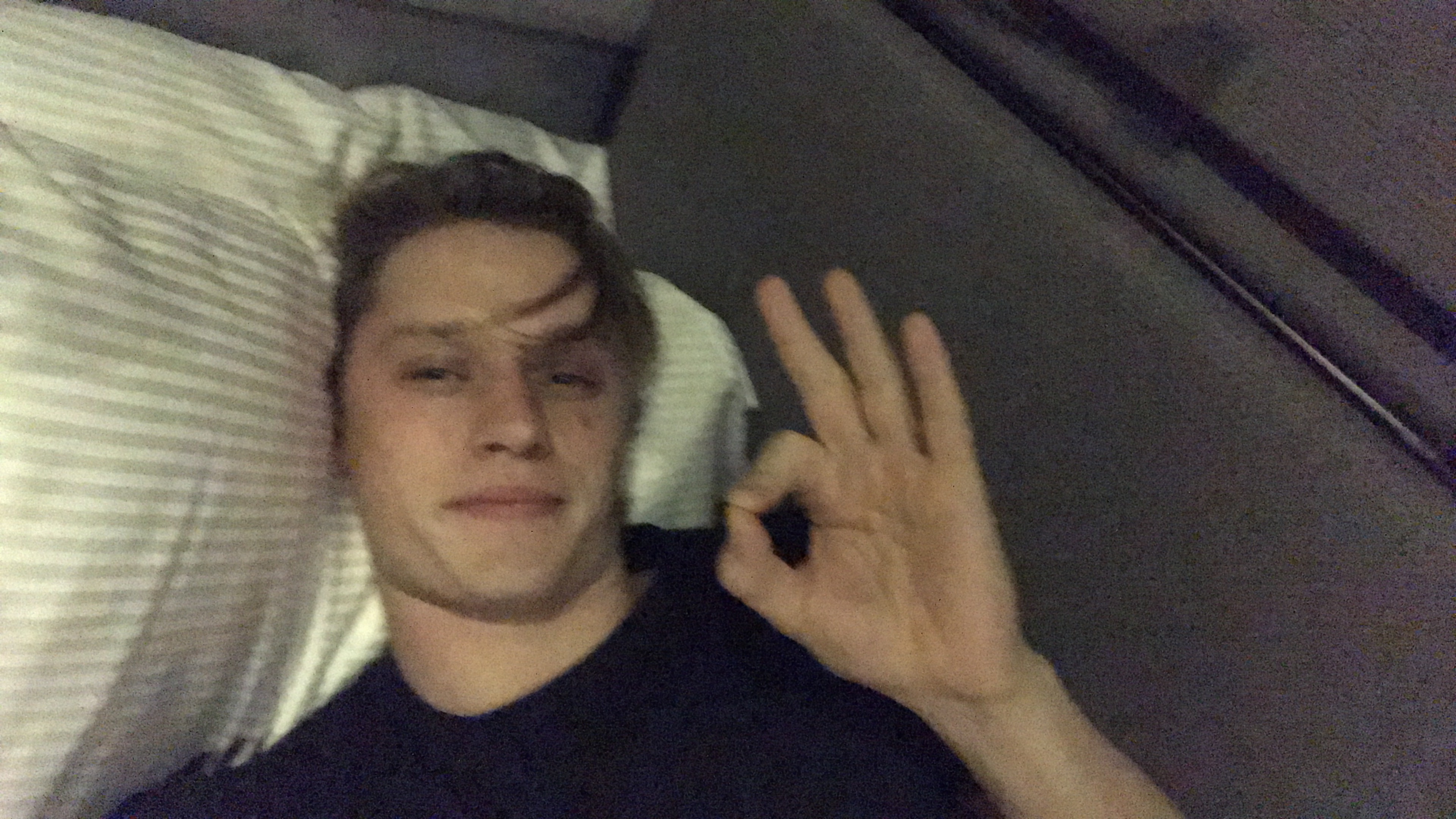 I’m throwing down the gauntlet for Challenge Robin III… 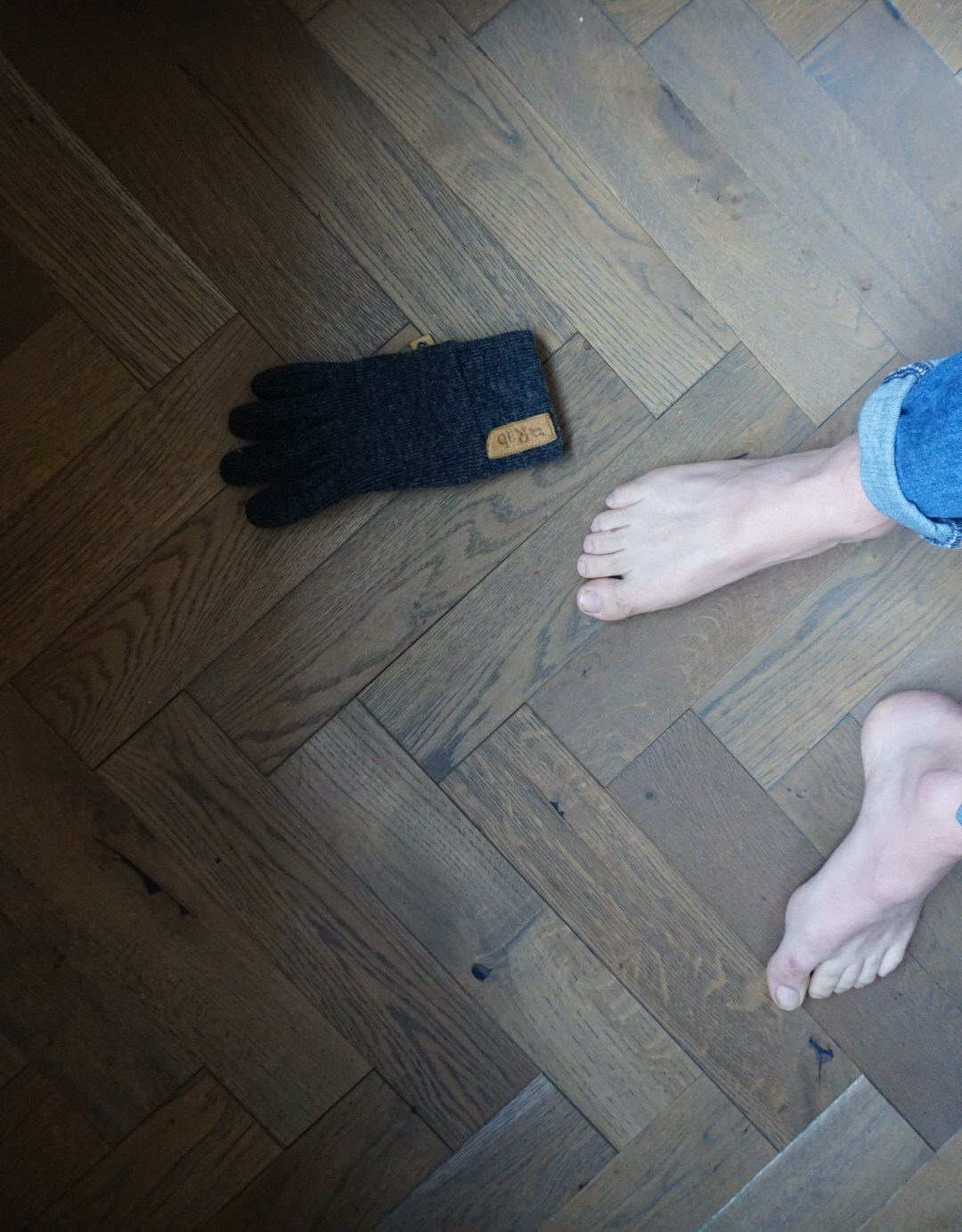